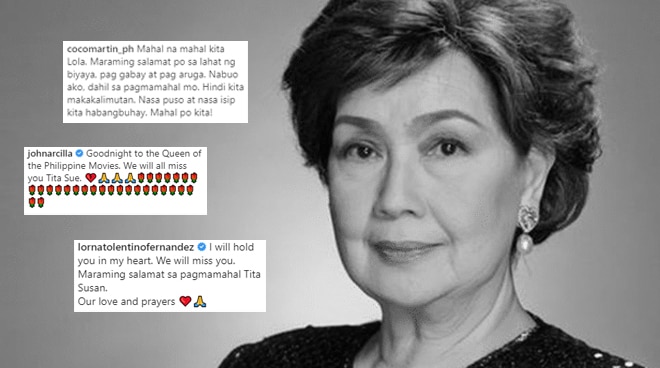 The Queen of Philippine Movies, Susan Roces, passed away peacefully yesterday, May 20, as announced by her daughter, Senator Grace Poe. Shortly after the announcement, celebrities paid tribute to the actress and sent their condolences to the bereaved family.

Judy Ann Santos, John Arcilla, Bianca Manalo, and Awra Briguela, who starred with the late actress on FPJ’s Ang Probinsyano, were some of the celebrities who honored the veteran star.

John shared a video of himself and other veteran actors serenading their Tita Susan. Adding a broken heart emoji, John wrote a short but heartfelt message to honor the late actress. “Goodnight to the Queen of the Philippine Movies. We will all miss you Tita Sue.”

Lorna Tolentino, whom Susan saw grow up from childhood, also paid tribute to the late actress. On Instagram, Lorna shared throwback photos of herself with her tita Susan and Fernando Poe Jr.

“I will hold you in my heart. We will miss you. Maraming salamat sa pagmamahal Tita Susan. Our love and prayers,” she shared.

On her Twitter account, Kim Chiu reminisced about her time working with the veteran actress. She remembered the star as the kindest actress she has ever met.

Actor Coco Martin, who has worked with Susan since the start of FPJ’S Ang Probinsyano, honored the actress with a series of black and white photos of the two of them on his Instagram. The actress was one of those who saw his growth as an actor.

Susan Roces made her debut in the showbiz industry in 1952, starring in the film, Mga Bituin ng Kinabukasan. She was late dubbed the “Queen of Philippine Movies,” due to her impact and contribution to Philippine Cinema.

Her last television program was FPJ’s Ang Probinsyano, wherein she played the role of Lola Flora.