Roxanne Guinoo is now a proud parent to a high schooler this year after her eldest daughter Reine’s graduation from grade school. 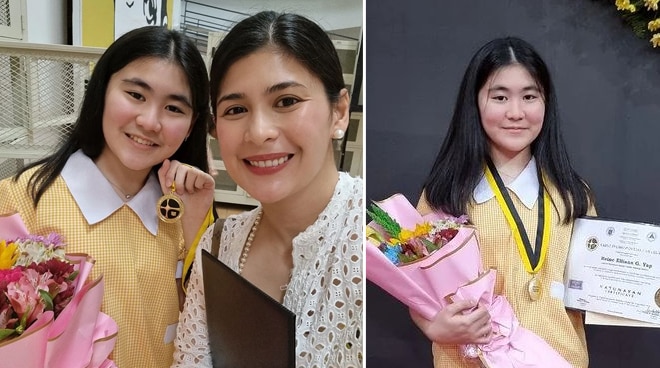 Having made her comeback to regular acting in the iWantTFC series Hoy, Love You! last year, Roxanne Guinoo made her fans happy seeing her teamed up again with longtime onscreen partner Joross Gamboa. The “JoRox” pair first became known after joining ABS-CBN’s first reality-based talent competition Star Circle Quest in 2004.

After getting married to her non-showbiz husband and businessman Elton Yap in 2011, Roxanne’s showbiz career took the backseat as she started a family which now includes their three children Reine, Sophia, and Reilly.

She wrote, “Happy Graduation to our dearest daughter, Reine.

“I am so proud of the person you are and how you do your best in everything. Always remember that I will always be here every step of the way to support and cheer for you. I want you to know that good character and heart surpass any achievement. A  daughter with a compassionate heart, who treats people with kindness and being the best person you can be are the greatest gifts I will be forever grateful to the Lord. I Love you so much Reine”

READ:  Roxanne Guinoo says her family is supportive of her love team with Joross Gamboa

In her romcom series Hoy, Love You! and Hoy, Love You Two! last year, Roxanne played the role of a single parent named Marge who meets single dad Jules (Joross).

The two accidentally meet each other but soon develop a close relationship when they are both assigned to work on a construction project together in the province.