Jillian Robredo alongside her sisters cheered for Dr. Taylor Swift at NYU. 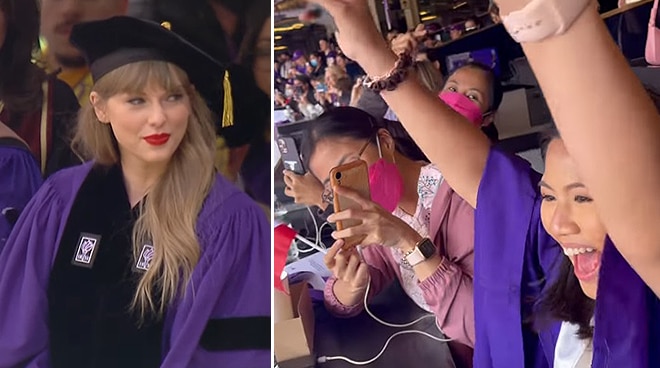 Jillian Robredo did not only graduate on Wednesday, May 18 (US time) from New York University. She also saw in person her idol Taylor Swift.

Jillian and Taylor were present at NYU's commencement exercises with Jillian graduating from her double major of Economics and Mathematics and Taylor receiving her honorary doctorate of Fine Arts from the university.

"Swifties that we all are, having Taylor Swift as Grad Speaker was the best gift. So, when she was about to be awarded with her Honoris Causa Doctor of Fine Arts Degree, Jillian left her seat to go to where we were seated to savor the moment with us. We were lucky to have good seats. Still very far from the stage but good enough vantage point. I documented the moment on video. Sorry for my unstable hands," VP Leni posted on her Facebook page.

In the video, the Robredo sisters could be seen cheering for Taylor as her achievements were read to the crowd by Jason King, Chair and Associate Professor of the Clive Davis Institute of Recorded Music from the Tisch School of the Arts, prior to the global pop star receiving her honorary doctorate.

"Taylor Swift, blazing singer-songwriter, producer, director, actress, pioneering and influential advocate for artists’ rights, and philanthropist. You have brought joy and resolve to your hundreds and millions of fans throughout the world," Jason said in his introduction of Taylor.

As the honorary doctorate was bestowed on Taylor, Jillian then exclaimed, "Doctor Taylor Swift!"

Jillian also shared the clip of their fangirling moment on her Instagram Stories. "Me as a proud mom to @taylorswift, girl nasa concert ka ba HAHAH," Jillian wrote in her IG Story.

She also commended her mom VP Leni for capturing clips of Taylor at the commencement exercises saying, "Mama has more vids of tswift than me chz."

Jillian also got to listen to Taylor's speech during the NYU graduation ceremony.

In her speech, the global pop star shared her "life hacks" that she wished she knew when she was still starting out in her career.

"Life can be heavy, especially if you try to carry it all at once. Part of growing up and moving into new chapters of your life is about catch and release. What I mean by that is, knowing what things to keep, and what things to release," Taylor told the class of 2022.

The "Cardigan" singer added, "Decide what is yours to hold and let the rest go. Oftentimes the good things in your life are lighter anyway, so there’s more room for them."

Following her graduation, Jillian also took to social media to pen a message as she concluded her scholastic journey in New York.

"It takes a village — immensely grateful for the people who made the last 4 years possible   Had the time of my life. It’s been a dream,@nyuniversity," Jillian wrote.