Liza Soberano spotted hanging out with James Reid in LA

Are Liza Soberano and James Reid working on a project together? 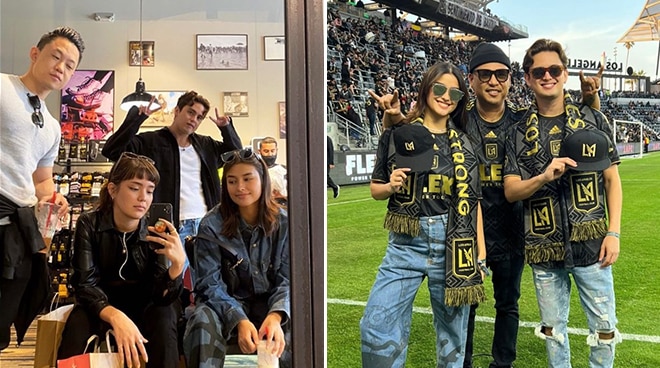 James Reid is back in Los Angeles following a brief stay in the country where he celebrated his birthday — and he’s been hanging out with Liza Soberano.

Although it is unclear what the two Kapamilya celebrities are doing in the US, it appears that both of them have been spending time with their friends who welcomed them upon their arrival.

A certain Marisa Pizzaro shared a group photo with James and Liza in it with the caption: “Welcome back @james @lizasoberano.” The 24-year-old actress reposted the photo via one of her Instagram story posts. In another Instagram story, James and Liza can be seen hanging out with some friends at a store as seen in a photo posted by a certain Ri Norton, which the actress reposted. The two also attended a football match at the Los Angeles Football Club - LAFC Experience Center with Grammy-nominated music producer Chris “Flict” Aparri based on the snap she shared on Instagram.

As of this writing, it remains unclear what the two are up to or if they’re cooking up a specific project with fans.

It was just last February when James flew to the US to pursue a career in the international music scene.

Liza, on the other hand, marked her 24th birthday in California last January with her love team and real-life partner Enrique Gil.

Meanwhile, Enrique Gil is currently on a European tour with his family.