Actress and television host Anne Curtis flaunted her toned figure while enjoying a beach getaway with her family. 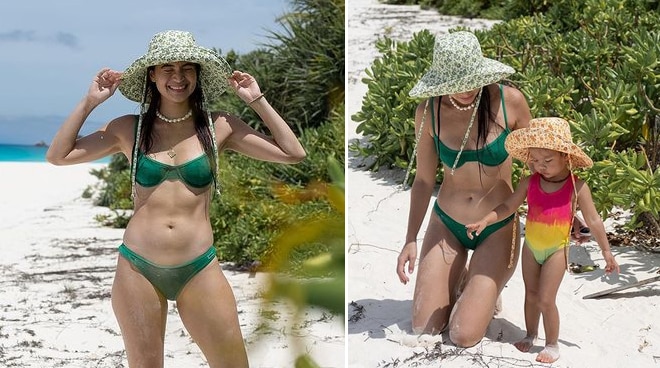 "Sana all" went most of the comments in Anne Curtis's latest bikini snaps, showing her toned figure, particularly her abs, while enjoying a beach getaway with her family.

The said photos, which sees the actress clad in a green two-piece swimsuit, already earned thousands of "likes" and hundreds of comments within an hour after they were uploaded on her social media pages.

Angel Locsin was among those who reacted to the post on Instagram, dropping a single raised hands emoji. Both Raymond Gutierrez and Bea Soriano Dee also left comments, praising Anne's figure using a series of flaming fire emojis.

Mariel Rodriguez, likewise, complimented the actress by describing her as "mom body goals."

Anne, 37, is currently on a beach vacation with her husband Erwan Heussaff and their daughter Dahlia Amelie.

The actress-host is set to make her showbiz comeback with a live concert titled Luv-Anne! The show will be held this coming June 11 at the Newport Performing Arts Theater of Resorts World Manila.

READ: Anne Curtis announces comeback concert ‘Luv-ANNE’ will be in person: ‘Finally seeing everyone in person’

Anne has been out of the spotlight for more than two years, since she left for Australia in December 2019 to prepare for the arrival of her daughter. She gave birth to Dahlia in March 2020, amid the COVID-19 pandemic.

Tickets for Luv-Anne! are still available for purchase via Ticket World and SM Tickets, with prices ranging from P2,500 to P10,000.