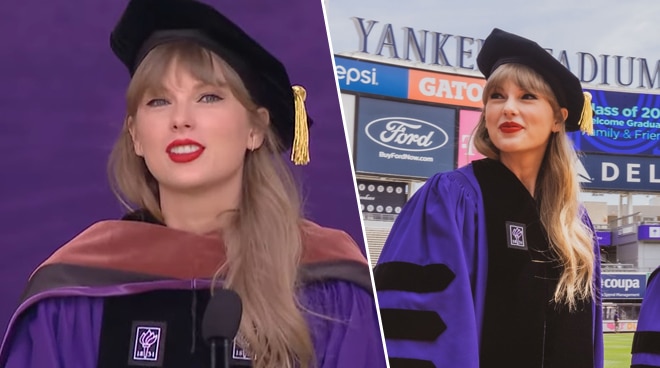 Taylor Swift marked a new milestone in her life on Wednesday, May 18 (US time, EDT), after receiving an honorary doctorate of fine arts from New York University.

"Wearing a cap and gown for the very first time - see you soon NYU," Taylor posted on her Instagram prior to attending the graduation ceremony at the Yankee Stadium on Wednesday.

After being bestowed her honorary degree, the singer delivered an inspiring speech to the class of 2022 at the commencement exercises.

"Last time I was in a stadium this size, I was dancing in heels and wearing a glittery leotard. This outfit is much more comfortable," she quipped at the start of her speech.

The 11-time Grammy winner then shared "life hacks" that she wished she knew when she was still starting out in her career.

"The first of which is... life can be heavy, especially if you try to carry it all at once. Part of growing up and moving into new chapters of your life is about catch and release. What I mean by that is, knowing what things to keep, and what things to release," she said.

The global pop star added, "Decide what is yours to hold and let the rest go. Oftentimes the good things in your life are lighter anyway, so there’s more room for them."

Taylor also stressed to the graduates how their choices will shape the fate of their lives.

The "Cardigan" singer also pointed out how failures in life are just as important as the success we experience.

"The times I was told ‘no’ or wasn’t included, wasn’t chosen, didn’t win, didn’t make the cut... looking back, it really feels like those moments were as important, if not more crucial, than the moments I was told ‘yes,'" she remarked.

By the end of her speech, Taylor highlighted the power of human resilience amid adversities.

"I leave you with this: We are led by our gut instincts, our intuition, our desires and fears, our scars and our dreams. And you will screw it up sometimes. So will I. And when I do, you will most likely read about on the internet. Anyway... hard things will happen to us. We will recover. We will learn from it. We will grow more resilient because of it," she said.

Also present at the event was Jillian Robredo, the daughter of Vice President Leni Robredo, who graduated with degrees in Mathematics and Economics. The vice-president and her two other daughters, Aika and Tricia, were also present at the commencement exercises.

Jillian took to social media to express her excitement about graduating alongside Taylor.

"Queen of my heart @taylorswift," Jillian posted on her Instagram Stories.

Fans all over the world also took to social media to congratulate Taylor.

"Why does every Swiftie here feel like crying? Congratulations Dr. Swift   Your hundreds of millions of fans around the globe are so happy for you," one fan tweeted.

"I'm so proud of you @taylorswift13. She's just so perfect. The speech had me crying. She just inspires people so much and I love every bit of it! Congratulations Taylor, I love you evermore," another fan wrote.