Sharon Cuneta talks about starring in and producing the movie based on Marivi Soliven’s 2013 novel about two Pinays who moved to America. 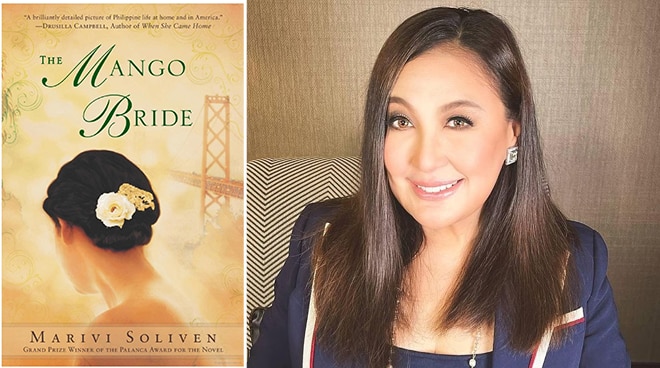 Aside from preparing for her Iconic concerts in June with Regine Velasquez, Sharon Cuneta also has a US tour with her lined up this year as well as an exciting movie project in the works. She will be starring in and executive producing the film adaptation of writer Marivi Soliven’s 2013 novel called The Mango Bride which  won the Grand Prize at the Carlos Palanca Memorial Awards in 2011. The book is about two Filipinas named Amparo and Beverly who migrate to the US.

“Our main executive producers are Singapore-based. They’ve produced some Hollywood movies already. I have yet to meet them in person. And then my other co-executive producer is actually my manager who has been producing movies in Hollywood for 20 years already.

“This is a Palanca award-winning novel that I read a long time ago and I’m re-reading now because it’s different when you know which character you’re playing. So we’re trying to make a nice cast. It’s teamwork every time we make a movie. So everyone has to be good in their role.

“When it all came together, it was really the choice of the director whose work I have never seen. He’s Fil-Canadian. For me it’s important kasi my manager is also Fil-Am so parang it was important na gusto na namin ipasok yung values ng Pinoy para makilala ang Pinoy.

“It was so important to us na yung storya, si Marivi (the author) kasi she knows it. She had the experience of being a Filipino living in the States as an immigrant working as a translator. We’re touching on domestic violence also,” she shared during the Iconic concert presscon held at the Marriott Hotel in Pasay City.

Sharon said casting for the film, which will boast of a predominantly Filipino cast, is still in the works especially for the younger members of the cast.

“So it will touch on the immigrant experience and domestic violence and just how Filipinos struggle also in America. And from the point of view of someone who’s lived it with some dramatic elements na hindi naman niya na-experience pero nakita niya. So it was so important to us to put together a buong Pilipino talaga na team. So mga 95% Pinoy, kung hindi Fil-Am, Pinoy,” she revealed.

After taking a break from doing movies during the pandemic, Sharon shared why she is proud to be one of the stars of The Mango Bride which starts shooting later this year.

“For me, it was the best project to present to a global audience about and made by Filipinos. Kasi delayed na tayo. Lahat tayo nag-i-English dito di ba? Magaling tayo. We’re like India, we’re the only ones who speak English. Kahit sinong Pilipino kausapin mo kahit broken English nakakaintindi ng Ingles and it’s well-spoken and much used.

“Parang we knew it was really important na yung movie has yung identity ng Pinoy. Hindi yung sasali ka lang sa Hollywood movie. We wanted it to be made by and starring Pinoys. With Pinoy stories. I’m going to start shooting end of the year,” she said.