Celeste Cortesi shared that it was her father who came up with her name. 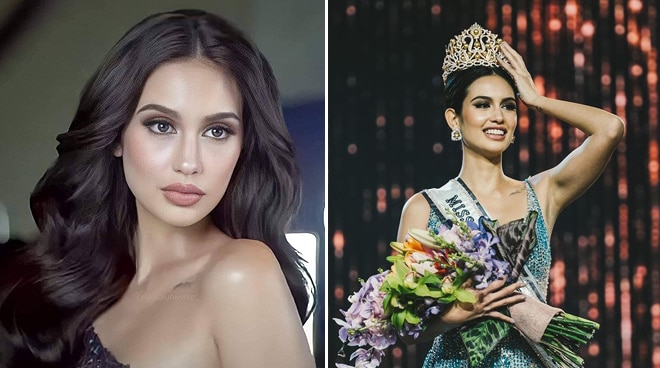 "'CELESTE' in Italian means heavenly, sky blue. My dad would always tell me the wonderful story on how he chose to name me Celeste.  ️ After I was born, while he was holding me in his arms, he looked at the sky   then he immediately knew my name would be Celeste," she posted on her Instagram page.

The beauty queen then revealed that her evening gown in the Miss Universe Philippines pageant was inspired by the color of the sky and was her way of honoring her father.

"Celeste is the color I wanted to wear on the final night, in honor of my dad. In every step on that stage I would feel his presence right beside me, my guardian angel," she stated.

The gown was made by designer Val Taguba.

"Thank you @valtaguba for this amazing creation, you made my dream come true," Celeste posted as she extended her gratitude to the designer.

She remarked that her previous pageant experience helped her to prepare for Miss Universe Philippines.

"Now I have the experience. I know where I have to improve, I know my weaknesses, and I know how to capitalize [on] my strengths as well... In the past four years I've been thinking, I didn't do a great job in my last pageant, but now that I'm Miss Universe Philippines, I know that [Miss Earth] really helped me in improving myself so much," she stated in an interview during the media briefing organized by PLDT Home.

She continued, "You know that whatever happens to you happens for a reason, and this was the reason. The reason why that happened is because now I know what to do, I know how to work on my weaknesses more. I'm just very grateful that I got this second chance to represent the Philippines in the best way I can."

Celeste shared that her parents were her source of strength and inspiration all throughout the competition.

"Yesterday, as I was walking on that beautiful stage all I was thinking was my mom and dad. The strength I got from them is indescribable. I’ve worked so hard for this, I’ve prepared. And I let God do the rest knowing that whatever is meant for me will never pass me by," she wrote in an Instagram post on May 1.

Celeste remarked that she is ready to carry the responsibilities of the crown.

"I’ve grown so much since I came to the Philippines 5 years ago and I really promised myself that I would only join a pageant when I am ready to take on the responsibility of a crown, and I am now," she stated.

The beauty queen hoped that her story had inspired many to go for their dreams.

"Yesterday, I’ve received my second chance and I am beyond honored and grateful to be able to represent my country in the Miss Universe stage. I hope that with my story I can inspire so many to  never give up on their dreams because through hard work, perseverance and faith you can achieve anything you want," she said.