See the reunion of Kris Aquino and Darla Sauler. 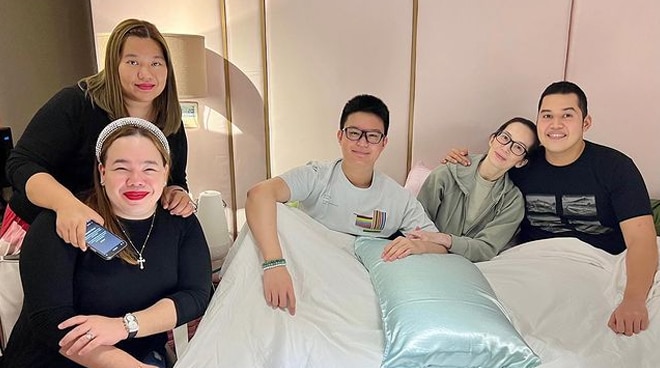 On her Instagram page, Darla shared the snapshot of their reunion.

Darla relayed that it has been a while since they met in person, but they have always been communicating online.

Kris and Darla worked together on Kris TV from 2011 to 2016. Kris TV was a morning talk show which featured lifestyle and educational places for the family to visit. It also featured celebrity interviews. From being a head writer, Darla became a co-host of Kris on the program later on.

It was in 2018 when Kris first revealed that she was diagnosed with an autoimmune disease called chronic spontaneous urticaria.

In March this year, Kris shared on social media that she received a new treatment and that she was planning to go abroad to seek proper medication.

"1st Xolair injection was a success, meaning kinaya ko the full dose," she shared in an Instagram post on March 1.

According to medicalnewstoday.com, Xolair "is used to treat long-lasting hives with an unknown cause. This condition is called chronic spontaneous urticaria, which used to be called chronic idiopathic urticaria."

The medication is "prescribed for people ages 12 years and older who continue to have hives even after they’ve used certain antihistamines."

According to Kris, if everything goes well after her next shot of Xolair, she would be flying overseas.

"Thank you for your prayers—supposed to rest this week, then March 13 ang next shot—then after 5 days, praying nothing goes wrong, we finally go abroad & I continue my next doses of Xolair and finally tackle my autoimmune and other important health problems. In case magtatanong kayo, still just 85 pounds (38.5 kg)," she said in her Instagram post last March.

Aside from Darla, Kapamilya actress Angel Locsin also spent time with Kris recently. They were reunited during a gathering for the talk show host's birthday.