Former ‘Pinoy Big Brother 737’ Big Winner Miho Nishida has always been proud of her only daughter Aimi’s achievements in school. 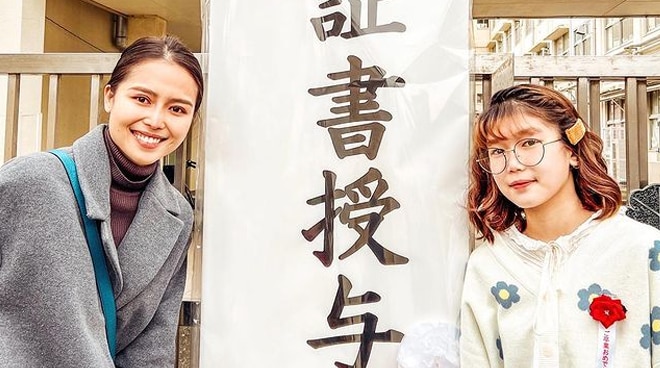 Having moved back to her hometown in Japan during the start of the pandemic in 2020, former Pinoy Big Brother 737 housemate-turned-actress Miho Nishida has been working at an aesthetic salon in order to be able to raise her only daughter Aimi as a single parent. With Aimi turning 12 last month, the former GirlTrends member also celebrated her daughter’s elementary school graduation.

In her latest Instagram post, she shared photos and clips from Aimi’s last day as a grade school student, with some of her classmates wearing the traditional Japanese kimonos to mark the occasion. She wrote,

(Congratulations on graduating from elementary school 🌸

On Aimi’s personal Instagram account, she also shared her graduation photos from elementary school where she and her classmates dressed in traditional Japanese kimonos. During their stay here in the Philippines, Aimi also received multiple awards when she was studying at the St. Mary’s College in Quezon City. Just like her mom, Aimi also tried her luck in Philippine showbiz when she joined the kiddie gag show Goin’ Bulilit in 2017.

In an interview last year, Miho revealed that she misses working in showbiz after doing her last kapamilya project Since I Found You in 2018. She was also seen in ABS-CBN shows like Langit Lupa, La Luna Sangre, Maalaala Mo Kaya, Ipaglaban Mo, and It’s Showtime after winning Pinoy Big Brother 737 in 2015.

The 29-year-old actress also shared how much her life has changed after leaving the limelight then living as an average person for almost three years.