Fil-Am artist Olivia Rodrigo on her three Grammy wins: ‘I’m excited to show them to my parents’ 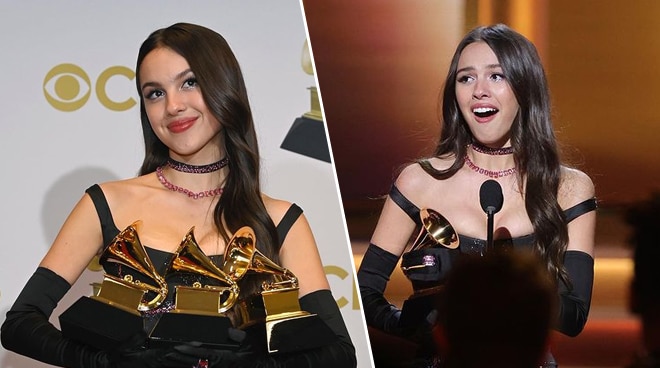 After her big win at the 64th Grammy Awards, Filipino-American artist Olivia Rodrigo was elated to show her awards to her loved ones.

"I'm just so excited to go home and show them to my parents and my friends. And it takes a village so I'm proud of myself but I'm also equally as proud of everyone that helped me get here," she said in an exclusive interview with the Recording Academy.

When asked how she feels that she is able to connect with people across generations through her songs, the singer remarked, "It's the dream. I just write my stories as honestly as I possibly can and the fact that it resonates with so many people, it's so beyond me and it's such a great honor. [I] just write songs that I like and everything else is kind of beyond my control."

Olivia remarked that winning at the Grammys felt like the "craziest validation in the world."

"I literally write my songs in my bedroom and the fact that I can get a Grammy out of it is beyond me," she added.

Olivia planned to have a party with her friends following her momentous wins.

"I'm going to go hang out with my friends, I'm going to have a little party, we're going to party it up. And it's going to be a great night," she said.

Olivia released her debut studio album Sour in May 2021.

In an interview with Good Morning America in March 2022 prior to the Grammys, the singer said she considers turning her heartbreak into art through her album as "empowering."

"I think it’s really empowering, actually, I remember listening to it after it came out and rolling out the window, blasting the song, and being like so proud of myself for doing it," she said in the interview.

Olivia also paid homage to her ancestry and expressed her appreciation for the Filipino community for supporting her in her journey as an artist.

"It’s amazing. I feel so proud to be a part of the Filipino community and they’ve been so lovely and so welcoming and supportive of me,” she stated in the interview.