Watch the music video for PSY’s new single ‘That That’ featuring Suga. 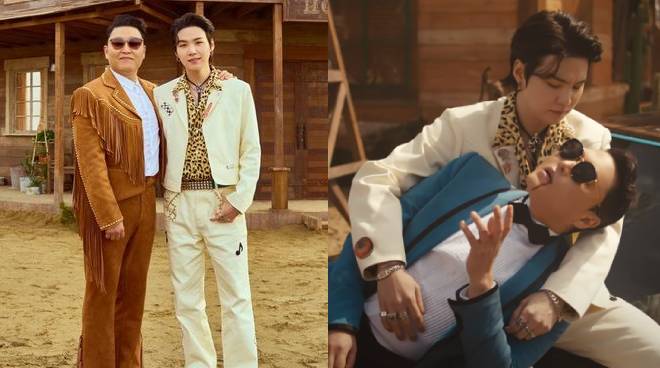 PSY released the music video for his highly anticipated new single "That That," which was produced by BTS member Suga.

The "That That" features PSY and Suga in a cowboy-themed music video.

Following the release of the music video, fans were quick to praise PSY and Suga's song.

"I'm already obsessed with this song. I never thought PSY and Suga will collab. But I'm so happy they did. They both are amazing talents," one fan said.

"This is like a completely different musical style, a collaboration we never expected, that would be legendary as there are two legends together in this music video," another fan commented.

"That That" is PSY's first single off his new studio album PSY 9th.

It was on April 26 when PSY revealed that he collaborated with Suga through a video teaser he posted on his social media pages.

In the video, Suga confessed that he initially felt nervous collaborating with PSY since he is his senior in the music business.

"At first, because he's many years my senior and someone who's so well-respected in the business I was quite nervous," he said.

The BTS member shared that they turned out to be the best of friends after they collaborated.

"It felt like working with a childhood friend so it made the songwriting process that much more fun. We became besties in a way," he said.

PSY also said that he considers Suga as his friend.

"He wasn't just my junior in the business but also he truly feels like a friend," he remarked.

The new album is composed of tracks such as "Celeb," "Hello Monday," "Everyday," and "You Move Me," among others.

Aside from Suga, PSY collaborated with other artists like Sung Si Kyung, Jessi, Heize, Hwa Sa, Crush, and Tablo in his new album.