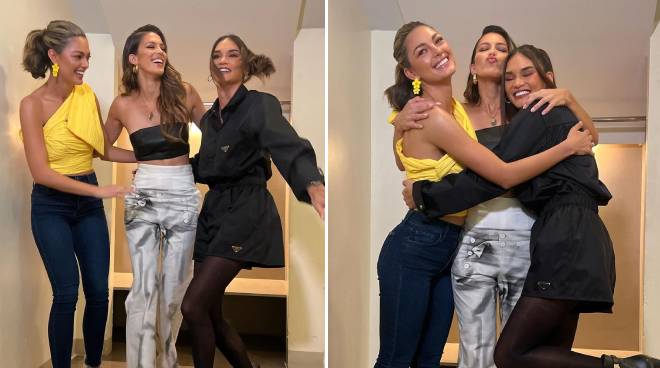 On her Instagram page on Friday, April 29, Iris posted snapshots of her reunion with her Miss Universe sisters.

"First day in the Philippines. Today was rehearsals, with the best snack from Jollibee have you ever tried it? So happy to be reunited with my sisters @piawurtzbach and @demitebow," Iris posted.

Meanwhile, on the official Instagram page of Miss Universe, the three beauty queens expressed their excitement hosting the Miss Universe Philippines pageant together.

"Hey everyone, we are in the Philippines, reunited, we are so excited," Demi said in the video.

They also shared fun facts about their coronations.

"[Pia] crowned me [here in the same venue]," Iris remarked in the clip.

"And Iris crowned me and I crowned another Filipina so, so excited to be here. We are all hosting the Miss Universe Philippines show tomorrow," Demi added.

"We are so excited to share with you guys the surprises we have in store," Pia said.

It was on Thursday, April 28, when Demi started her activities in Manila following her arrival in the country.

"It’s Pageant week everyone! So honored and excited to be back in the [Philippines] and to be a part of the coronation of @themissuniverseph this weekend!" Demi posted on her Instagram page on Wednesday, April 27.

Harnaaz became part of the Miss Universe Philippines preliminary show as a judge.

The coronation night of the Miss Universe Philippines 2022 pageant will happen on Saturday, April 30, at the Mall of Asia Arena.

Pageant fans can watch the coronation night on iWantTFC, ABS-CBN Entertainment YouTube Channel, and The Filipino Channel (TFC) on April 30 at 7 pm.