Comedienne-singer Kitkat could not contain her excitement as she revealed to her fans and followers the gender and name of her baby. 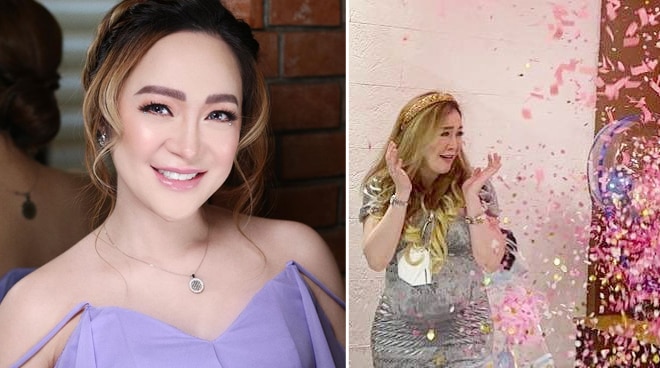 Comedienne-singer Kitkat could not contain her excitement as she revealed to her fans and followers the gender and name of her baby.

Kitkat, who is pregnant with her first child, announced on Monday, April 25, that she is expecting a baby girl.

Sharing a clip of her gender reveal on Instagram, the actress wrote: "It's a GIRL!!!"

"We all thought it's Mini Walby hahahaha. All the signs and itsura ko at lahat ng mga kaitiman at pimples meron ako, kaya kala namin BOY! Pero pasasaan pa, kelangan may magmana ng trono, MY VERY OWN MINI ME! Hahaha."

Aside from the gender, Kitkat also revealed the name that she would be giving her baby girl — Uno Asher B. Favia.

Sharing the meaning behind her daughter's name, Kitkat wrote: "ASHER from the bible means 'THE LUCKY ONE, BLESSED and The HAPPY ONE.' Girl man or boy, 'yan na talaga ang name hehehe… 1 month palang ako may name na talaga siya."

It was on Valentine's Day this year when Kitkat, 37, announced her pregnancy.

The comedienne is married to Walby Favia, the brother of celebrity chef Jeremy Favia. In a past interview, Kitkat revealed that she and her husband have known each other since they were children, and that she has always had a crush on him.