Baron Geisler fulfills dream of getting a college degree 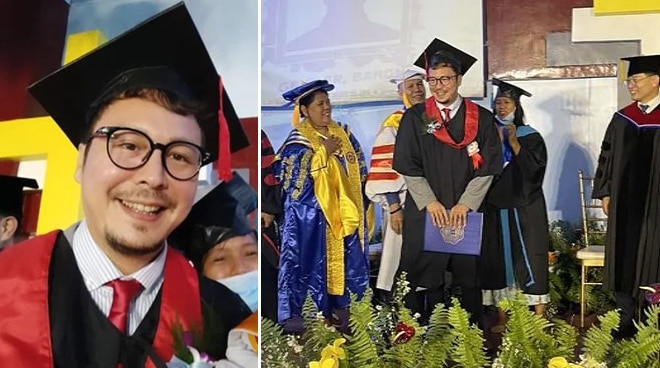 These were the words of Baron Geisler as he finally fulfilled his lifelong dream of earning a college degree.

The Barumbadings star, 39, happily announced to his Instagram followers that he has graduated with a degree in theology from the All Nations College in Antipolo, Rizal.

Sharing photos from his graduation ceremony this Tuesday, April 26, Baron said: "My journey has reached its goal, and opened a way before me. Thank you Lord!"

In his Stories update, the actor also thanked his mentor — a certain Doc Eph — for guiding him on his journey as he accomplished his goal of being a college graduate. Noticeably absent in the photos he shared, however, was his wife, Jamie Evangelista, and their daughter Talitha Cumi.

It was only early this April when Baron became the subject of headlines anew after his wife revealed that he is struggling with alcohol addiction again.

Baron later confirmed this in an exclusive interview with Inquirer, where he also divulged that he and his wife have decided to take a break and seek treatment. Currently, the actor is staying with a sponsor in Bulacan.

"I am learning to live life on life’s terms," he said at the time. "I’m doing service in our community. I work out every day. I have to cook dinner on Thursdays and clean the yard and garden and look after four dogs. I am still actively working to provide for my family.

"Hopefully, we can soon be back together when emotions are less raw," he added. "I pray for Jamie every day and ask the Lord’s grace for me as I work on my program."