‘2 Good 2 Be True’ actress Kathryn Bernardo shares what made her say yes to her new rom-com series with Daniel Padilla. 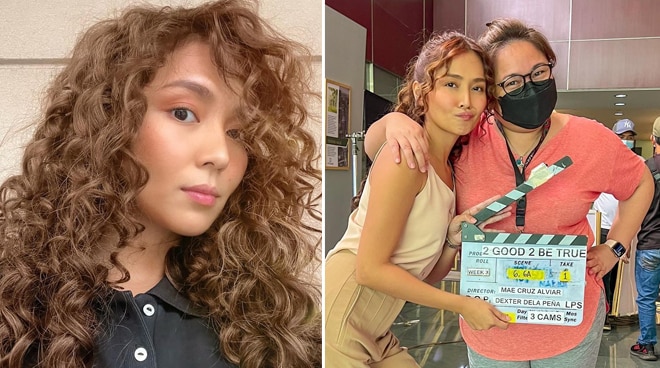 When she first got offered the chance to do a new project this year, Kathryn Bernardo shared what was the biggest selling point for her about 2 Good 2 Be True aside from being paired with her real-life boyfriend and love team partner Daniel Padilla.

“I got excited when they told us if ever tito Ronaldo Valdez would accept this project kasi siya yung magiging yung lolo. Nung sinabi yun sabi ko, ‘Oh my God I want to do this!’ Kasi it’s not just a love story yung 2 Good 2 Be True. Very relevant yung story. Maraming ma-ta-tackle na hindi natin alam nangyayari sa ibang tao. So nung nalaman namin na in-accept na ni tito Ron parang sign na yun sa akin ng universe na I think I should do this. Kasi gusto namin ng rom-com, binigay rom-com. We wanted direk Mae (Cruz-Alviar), binigay si direk Mae, and then tito Ron nag-yes siya. So walang reason to say no to this. So when they told us about that sabi na namin this was the project for us and it’s really worth doing,” she shared during Netflix’s 2 Good 2 Be True media event.

With 2 Good 2 Be True promising many romantic moments between her and DJ in the show, Kath admitted that it was a challenge for her to level up the “kilig” scenes with him in the series.

READ: What is Kathryn Bernardo’s birthday wish as she turns 26?

Playing the role of a woman named Ali who is jaded when it comes to love because of what she experienced with her parents’ own love lives, Kath shared what advice she would give her character if they met in real life.

“I’d advise her not to be scared, to trust people, and to give chance. Kasi yung character ni Ally, she’s very protective, guarded siyang klase ng babae, and with her experiences with her mom may tendency talaga na may trust issues siya especially sa guys. And then maybe kung kausap ko siya sasabihin ko na just give chance kasi hindi naman lahat ng tao masama. There’s still goodness in this world. Meron pa ring mabubuting tao and you just have to give that chance. I would tell her that,” she added.