Kylie Verzosa couldn’t help but become emotional after the topic of breakups was brought up during one of the segments of ‘It’s Showtime.’ 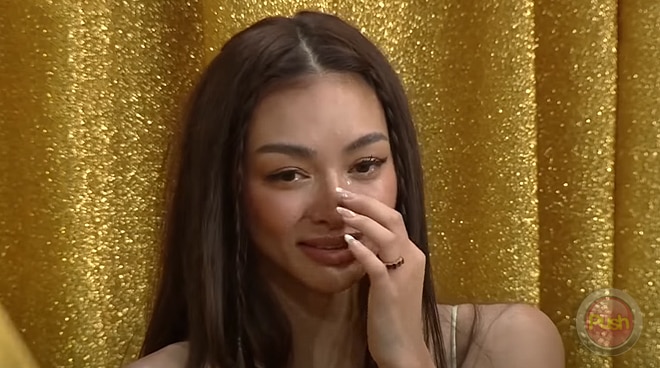 Rumors about Kylie Verzosa and Jake Cuenca’s relationship have been making rounds online for quite some time now. But it appears Kylie’s emotional moment on It’s Showtime may reveal more to these speculations.

Kylie, who is one of the judges on the noontime show’s segment called Showtime Sexy Babe, broke down in tears during an episode that aired last April 19.

This, after the topic of breakups, was brought up during the said segment where she sits as co-judge alongside Ruffa Gutierrez and Chie Filomeno.

Host Vice Ganda, who had been candidly talking about the topic with one of the contestants, suddenly asked a question which seemed to have struck a note with Kylie.

After he asked the question, he looked towards Kylie and said: “Aminin niyo, nag-iisip kayo, si Kylie parang nag-isip. May pinagdadaanan ka bang challenge or may nakikita kang sign?”

Kylie, for her part, did not answer the question and broke down in tears instead. This prompted Ruffa, Chie, and Vice to give her a hug.

The beauty queen then tried to cover her face and apologized to the audience. After the hosts told her she was not required to say anything, she answered by saying: “Na-touch lang ako.”

As of this writing, Kylie and Jake have yet to confirm the breakup rumors. They have been in a relationship for two and a half years now.