Thirteen-year-old Naomi Mababa performed ‘Angles Like You’ in the blind audition of ‘The Voice Kids Belgium.’ 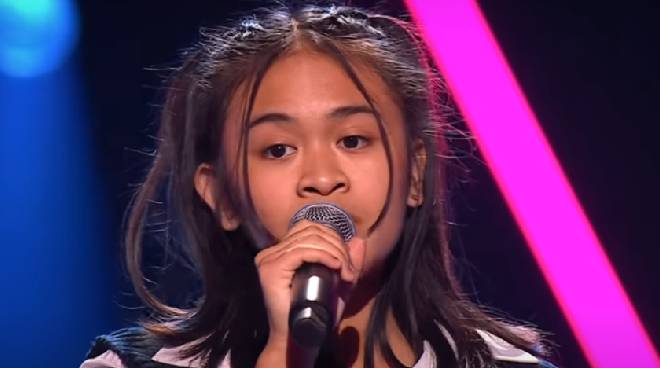 A young Filipino girl received two-chair turns during the blind audition of The Voice Kids Belgium and made it to the next round of the competition.

Performing "Angels Like You" by Miley Cyrus, thirteen-year-old Naomi Mababa impressed the judges with her rendition of the song.

Dutch singer-songwriter Duncan Laurence and Flemish-Dutch girl band K3 were the ones who turned their chairs for Naomi during the blind audition.

"You did a great job. You made me enjoy... I wanted to hear more but I think we will hear more from you," Duncan said.

Meanwhile, K3 member Hanne Verbruggen told Naomi, "It was very good. I'm impressed because there was a moment that you were I think losing a little bit and you stopped and you sang further. It was like oh that was really strong and you were giving everything and that was the power and I was like, ‘Oh I like this, this is what we need in our team.’ So if you like to, you are welcome in our team.”

When it was time to choose her coach for the competition, Naomi picked the group K3 to be her coach.

“Ever since bata pa po ako, it’s been my dream to be a singer," the aspiring young singer said in an interview with TFC News.

According to Naomi, she and her dad practice every weekend through their jamming sessions.

But Naomi has been facing a challenge lately. She recently contracted bronchitis which affected her voice.

Naomi’s family is praying that she will get well soon so that she can start rehearsing for the battle rounds.