Andrea Brillantes reveals two-year relationship with Seth Fedelin: ‘It was my first heartbreak’

‘Lyric and Beat’ star Andrea Brillantes airs her side of the story regarding her reaction to Seth Fedelin and Francine Diaz's dating rumors. 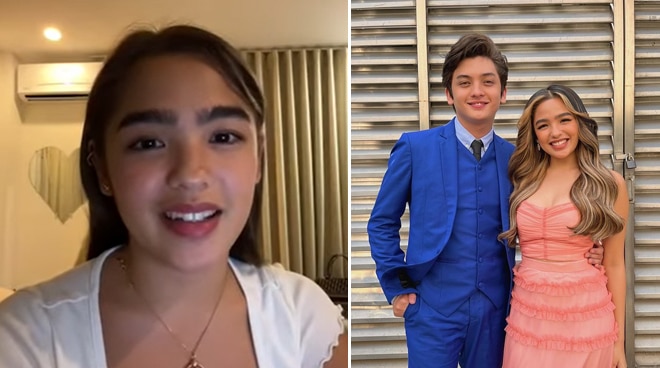 A day after Seth Fedelin spoke up in defense of Andrea Brillantes after she received online hate after declaring her new relationship with basketball player Ricci Rivero last weekend, the 19-year-old actress decided to air her own side of the story in a video she posted on her Instagram account last April 11 with a live audience of 156,000 viewers.

She wrote in the caption, “This is my truth. You can do whatever you want with it basta masaya na po ako . I love you all so much wala nang away away please thank you

Having been first paired with Seth onscreen in the 2018 series Kadenang Ginto, Andrea revealed that she and her love team partner had been also dating in real life for more than two years. She started off the video thanking him for speaking up for her.

Andrea also wanted to clarify the rumors regarding her relationship with Seth and how they parted ways despite continuing to do back-to-back projects together this year.

“I would like to address each issue one by one so please bear with me. I’m going to start with, ‘We broke up last year.’ Early October yun and it was a painful breakup but it was a mutual decision, yung paghihiwalay namin. We both loved each other truly and deeply. We’ve learned so much from each other. But in the end we realized na we weren’t growing as individuals. Lahat ng fake news at pag-a-assume niyo sa nangyari sa relasyon namin, hindi totoo yun. We ended on good terms at yun naman ang importante,” she admitted.

The Lyric and Beat star reiterated their mutual decision to continue working closely together regardless of their breakup.

Addressing the second intrigue she faced this year, Andrea was apologetic when talking about the emotional TikTok video she posted right after seeing the photo of Seth celebrating New Year with Francine Diaz’s family. During that time, she admitted she was still affected by their breakup.

“I admit I made an honest mistake and that was showing my emotions online sa public. So this is why you should always think before doing something. At aaminin ko, my mind was too clouded with sorrow that I forgot to think about what will happen next. Or how this could affect me or people around me. I had no contact with them when I saw the picture. So I made a TikTok which made everything worse. I know na I should have asked first. I should’ve consulted my managers before posting it, or sana nanahimik na lang talaga ako.

Using Selena Gomez’s song “Lose You To Love Me,” in her TikTok video, Andrea said was very deliberate.

“Kaya I used that song. Kasi the lyrics in that song was the most accurate and relevant lyrics to what I was feeling at that time.  Wala din naman ako sinisisi. I never meant to put anyone down. Ayoko manira ng tao. Nagulat na lang din ako and I was just really hurt kasi kaibigan ko pa yung kasama. Pero I had no bad intentions. Hindi ko lang talaga naisip kasi I was acting based on my emotions at pagkakamali ko yun,” she recalled.

Looking back on the incident which left their fans shocked, Andrea owned up to the mistake and hoped her followers would do better than her if they ever get put in that kind of situation.

“I tried to call so many times to have an explanation, makakuha ng sagot. But no one answered. And nung meron na namang sumagot, it was too late. It was too late for me to take it all back, it was too late for me to delete the video that I posted. Kaya guys please take this lesson from me, learn to reflect, to pause, and to breathe when everything is falling out of place. Basta kapag masyado ng puno ang emosyon mo, please pause ka muna. Don’t do anything foolish. Don’t do anything without knowing the whole truth.

“Pero para sa akin naman, it is never foolish to post your emotions online. Because sadness is a natural and a valid feeling for a human being to feel. Pero kasi since we live in our generation where everything you do and say can be used against you in a negative way, you should always be cautious with your actions. Kasi whether you have good intentions, it won’t matter na once it’s out in public. Because people will always twist everything,” she explained.