Actress and vlogger Angel Locsin gets candid with her father Angelo Colmenares after he turned 95 years old last month. 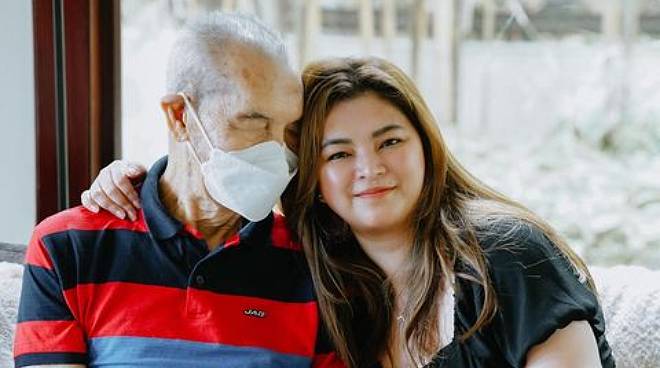 Back from taking a break during the country’s most recent lockdown, celebrity couple Angel Locsin and Neil Arce finally uploaded their latest vlog titled “Conversations With My Father” on YouTube last March 5.

The vlog started off showing the celebration of Angel’s father Angelo Colmenares’s 95th birthday last February 17. This was the first time Angel featured her father for her vlog.

Angel initially asked her father how he felt about turning 95 and having lived through the war growing up. Mr. Colmenares shared, “Very satisfactory. I think I lived an excellent life. I was 13 years old when the Japanese landed in Iloilo, Philippines. That was the start of the World War. I was the youngest of 11, three women and eight men. We were afraid, of course we hid ourselves. We stayed in the cave in the mountain. Our house in Guimaras was occupied by the Japanese. They made it into a garrison. They did not burn it because we befriended them. Usually when they leave the house they burn it. But in our case no,” he recalled.

The 36-year-old actress also asked her father to share his personal journey after going fully blind more than two decades ago. Angel shared that her father did not initially disclose his condition to their family.

Her father revealed how he found the path towards accepting the loss of his eyesight due to cataracts and retinal detachment. “When I got completely blind, being an active person, an athlete. (Inisip ko) ano gagawin ko? Bulag ako. I was really desperate kasi bulag na ako. Sumama ako sa mga nag-bible study. Doon ang unang-unang pinag-aralan namin na hindi ko makalimutan ay Ecclesiastes 12:13 na nagsabi na para makapunta tayo sa heaven, there are two things that we have to do. One is to believe in Jesus Christ and second is to obey his commandments. So ako naniwala diya. Na because of that, nag-change ang lifestyle ko. Ang lahat ng bisyo, walang masamang ugali. It gave me peace of mind. That’s how I overcame my problem,” he revealed.

During his younger years, the 95-year-old patriarch shared that aside from his family, it was his love for sports and his job that gave him a happy life. “I was a swimmer and I’m a (bronze) medalist in the Second Asian Games. Wala pang SEA Games nun. I coached in the American School Swimming Team. (I did) fun runs, marathons, and international marathons. The Magnolia International Marathon ako nag-organize niyan. Nasa record yan,” he recalled.

Before concluding the vlog, Angel’s father also shared his birthday wish this year and advice for those who want to live a long and happy life like him. “I wish that my family will stay together all the way and be happy. (Just) eat healthy food, exercise regularly, kailangan magkaroon ka ng peace of mind, good mental health, and of course nasa Diyos ka,” he said.