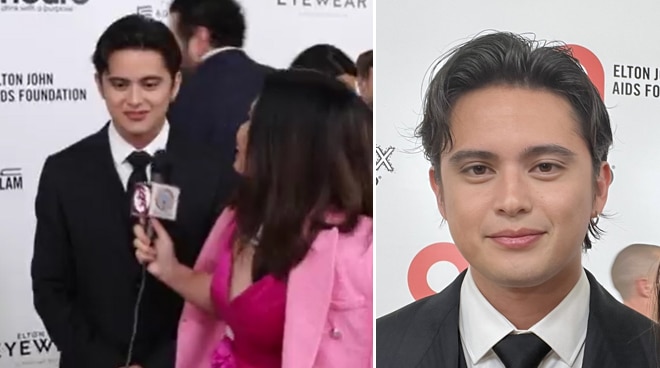 It seems as though James Reid is determined to conquer the international scene now more than ever as he continues to do appear at various public engagements — including an Oscars event.

According to Yong, James admitted that he got starstruck seeing Hollywood stars beside him.

“His publicist at first said no to interviews but glad he stopped when I yelled my affiliation haha. Great to meet and chat with him!” Yong wrote in a tweet.

#JamesReid is here! He said he’s a bit starstruck at the moment - but I’d say he’s holding his own beside Hollywood stars. His publicist at first said no to interviews but glad he stopped when I yelled my affiliation haha. Great to meet and chat with him! #oscars #EJAFOscars pic.twitter.com/BaqhSkdkkj

Yong said her interview will air on both the ABS-CBN News Channel (ANC) and the flagship news program of the Kapamilya network, TV Patrol.

Oh, hey #JamesReid fans! Here’s a short clip while I’m waiting for the editors so I can voice my #Oscars story - will be on ANC and TVP. pic.twitter.com/ena8m5XTRw

It can be recalled that James flew to the US in February to pursue his international music career.

Meanwhile, the event James attended was hosted by Lady Gaga, Billy Porter, Eric McCormack, and the CEO of Rocket Entertainment and chairman of the Elton John AIDS Foundation, David Furnish.

The said event raised $8.6 million for the Foundation’s lifesaving work to end AIDS.