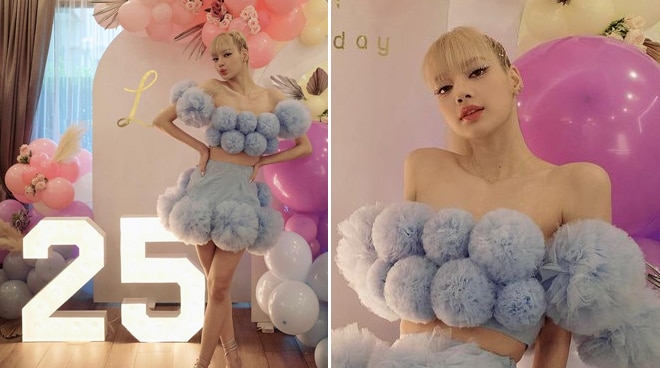 The K-Pop star shared snapshots from her birthday celebration on her Instagram page.

"I’m so happy that this year I can spend my birthday with family and friends," she posted on social media.

She also extended her gratitude to those who made her birthday a memorable one.

"Thank you everyone for making another year of my birthday so special," she said.

Prior to her birthday, Lisa was in Paris. Photos of the singer strolling around the City of Lights alongside American actor Austin Butler and CELINE's director of couture and events Peter Utz made rounds online.

Lisa is a Thai rapper, singer, and dancer who was born in Buriram Province, Thailand. The singer was raised by her Thai mother and Swiss stepfather.

In August 2016, Lisa debuted in the K-Pop girl group BLACKPINK alongside Jisoo, Jennie, and Rose. The group was formed by YG Entertainment.

They produced numerous massive hits like "Ddu-Du Ddu-Du," "Kill This Love," and "How You Like That," among others. The K-Pop group released their first album called The Album in 2020.

In an interview with Vogue in September last year, Lisa shared how she was very hands-on with the creative process of producing her solo album.

“2021 has felt like fate, like destiny. Releasing my long-awaited first solo album was truly a dream come true. I don’t think I can ever forget that. I was excited and nervous; I wanted to show who I am as an artist, as well as share the exact message that ‘Lalisa’ carries," she told Vogue.

She added, "My ideas are reflected in the album, from the Thai-style melody line within the song to the music video sets, styling, album design, and choreography,” said Lisa. “I actively participated throughout the entire process, [so] personally it was an extraordinary experience. I worked hard just imagining the day I would get to showcase it and enjoy it with all my fans."