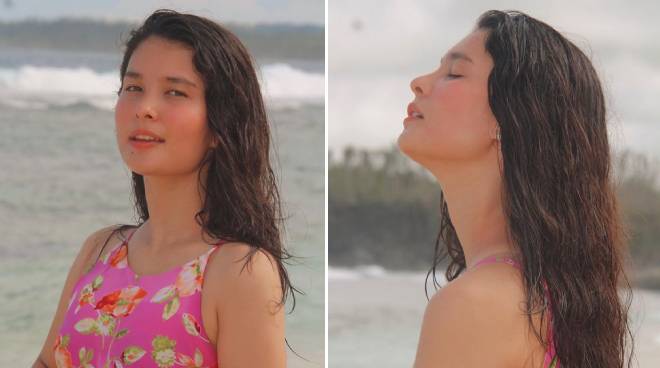 "I literally cried. I cried the first thing [when] I got to see my home like sa window sa plane. I got to see my home but at the same time I felt sad because the coconut trees lahat sira, lahat nakataob sila lahat. And I was devastated lang to see my home like [that] and the people too may iba na nagsa-suffer din, 'yung mga people sa remote area na hindi masyado napupuntahan and nabibigyan ng relief goods,” she said in an interview with ABS-CBN News.

Anji shared that it was actually the first time she returned home since she joined another reality television program of ABS-CBN which was Idol Philippines.

To help address the needs of her kababayans in Siargao following the onslaught of Typhoon Odette, Anji shared that she launched relief efforts alongside her family, friends, and fans on the island.

“What we did po, me and family din po, with the help of my Sunshines (Anji’s fan group) din po who are also there in Siargao, mag-Siargaonon din po, we distributed help din po,” she said.

Anji continued, “After talaga ng PBB, the first thing that I did, the first live [show] that I did is to give back agad. I initiated po like a donation drive to help Siargao especially my hometown grabe sobra po talaga siyang naapektuhan. Harap po talaga kami ng Pacific Ocean, wala pong naka-block don sa amin. Like 'yung mga bahay na near sa dagat they are all wiped out.”

The singer released her song “Dalampasigan” on Friday, March 18, which is a song reminiscent of her life back in Siargao.

She first performed the song at the ABS-CBN Foundation benefit concert "Tulong-Tulong sa Pag-ahon: Andito Tayo para sa Bawat Pamilya." Asked why she became emotional that time while performing the song, she shared, “When I was singing that song parang I felt nostalgic at that time kasi I knew how beautiful Siargao was and to see my home really devastated by the Odette sobrang na-heartbroken po ako."

Aside from singing, Anji has been tapped to host the online reality show Bida Star.

READ: Anji Salvacion describes first day in the outside world after making it to the Top 2 celebrity housemates

She remarked that it was very inspiring for her to be chosen as one of the hosts as she herself was once part of a reality show.

"For me it means a lot. To think of the journey that I've gone through, bago pa ako talaga makapasok sa Idol Philippines, grabe 'yung audition process, sobrang tagal, sobrang dami ng waiting and what you can just do is to always give your best. And now to be a host of a singing contest, I felt so inspired din to help other people, to inspire other people, everyone na to reach for their dreams talaga," she stated.