Just a day after she revealed her engagement to basketball player Sol Mercado, beauty queen Sandra Lemonon announced that she is pregnant with her first child. 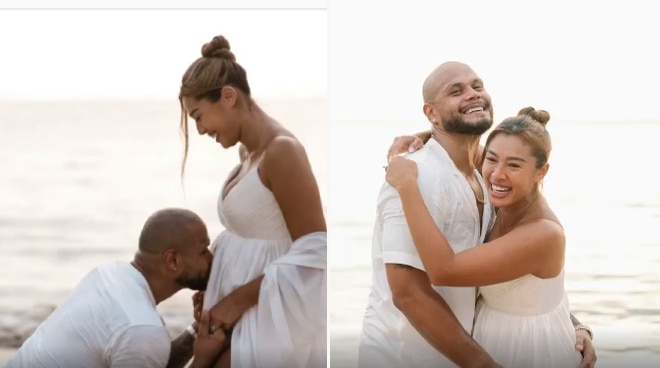 Just a day after she revealed her engagement to basketball player Sol Mercado, beauty queen Sandra Lemonon announced that she is pregnant with her first child.

On Instagram on Monday, March 14, Sandra shared that she and Sol are expecting a baby boy, as she posted photos of a gender reveal party they recently had for their firstborn.

"Our baby boy. #KingZ I’ve always imagined myself having a little baby boy. For it to actually happen is a surreal feeling," the beauty queen said.

Addressing her fiancé, Sandra wrote: "You are an amazing life partner/friend and now Papa. Thank you for another priceless gift in helping me become a Mama. We love you."

Based on her social media posts, it was during the gender reveal when Sol proposed to her in front of their friends and family.

"Creating life together. We love you Papi," Sandra said in one of her posts, which showed pictures of Sol down on his knee and asking her hand for marriage.

Sandra, 27, first confirmed her relationship with Sol in September 2021.

The beauty queen from Taguig competed in the inaugural Miss Universe Philippines pageant in 2020 and finished as a semi-finalist.

She also joined Miss World Philippines in 2016, where she finished in fourth place, and Binibining Pilipinas in 2018, as a semi-finalist.

Meanwhile, Sol is a player for the Philippine Basketball Association (PBA). He has played for teams Rain or Shine, Meralco, San Miguel, Barako Bull, and Ginebra.

Sol is the former fiancé of actress Denise Laurel. They called off their engagement in 2016.