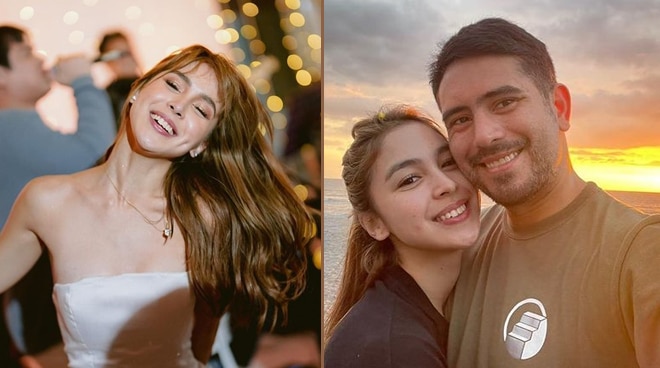 Julia Barretto’s boyfriend Gerald Anderson was not able to make it to her 25th birthday party with friends and family because of the lock-in taping for his new series A Family Affair which was shot all the way in Masbate City. So now, Julia said she is looking forward to have their own post-birthday celebration this week.

“He’s coming home tomorrow. We’ll probably do a little get-together and have a nice dinner with our friends when he gets back. Maybe just a nice dinner,” she shared during Vivamax’s The Seniors mediacon held last March 14.

When video clips from Julia’s birthday went viral as it showed the birthday girl making a very happy entrance to her party, Julia revealed the real reason for her extra celebratory mood.

“Kasi kumakanta sila nasa banyo pa ako. So by the time pagpasok ko, nagkagulatan na lang sila na nasa banyo pala ako the whole time. But I guess my energy was like that because first of all I was very happy that night. I was surrounded by my favorite people and second, the wine? Because of how many glasses of wine I had (laughs). Yun lang naman yun. I had a really good time. We had a good night. I was surrounded by my family and my friends and everybody I’ve kept in touch with the past few years. It was so nice to finally be reunited with everybody after how many years,” she explained.

READ: Julia Barretto wows with most daring pictorial yet

READ: Julia Barretto on shooting daring scenes in her movies: ‘It’s a leap of faith I have to take’