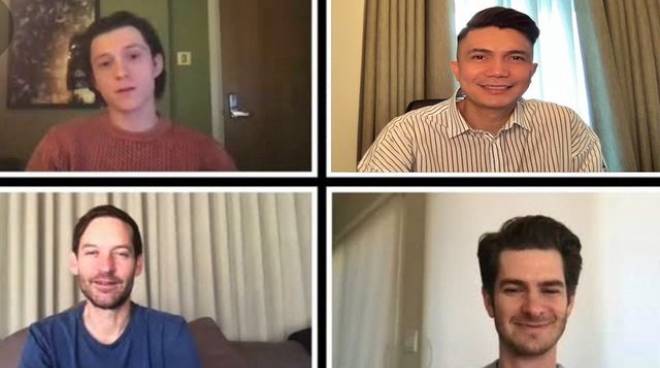 Vhong Navarro made a parody of the virtual interview of Spider-Man stars Tom Holland, Andrew Garfield, and Tobey Maguire in his latest social media post.

On his Instagram page, Vhong inserted his photo in the screenshot of the virtual interview of the actors.

"Nice catching up, guys! Proud of you always! #Gagamboy2," he wrote.

Netizens were quick to react to Vhong's hilarious post.

It can be recalled that Vhong starred as Gagamboy in the Philippine superhero movie of the same title in 2004. Vhong played the role of Junie, an ice cream vendor who gained special abilities when he swallowed a spider exposed to a chemical spill.

Tom, Andrew, and Tobey, who played Spider-Man in different movies, united for the first time in the Spider-Man: No Way Home movie.

In their first virtual interview together with Deadline last January, Tom shared his thoughts on the massive support that they received after the film premiered.

"I mean, I always knew that this film would be loved around the world. I didn’t think it would be quite as massive as it has been. One of my favorite things to do at the minute is to go online and watch fans’ reactions to you guys coming in that one scene in particular. I don’t think I could ever have imagined it as being so well received by everyone. I mean, I guess I had an idea that people would love this movie, but in no way, shape or form could I have thought it was going to be as big as it has been," Tom said in the interview.

“And it’s been only the last couple weeks that I have sort of really come back to reality and come home and started to face real-world problems, and it feels like we’ve been on some sort of really weird dream. It feels really strange,” he said.