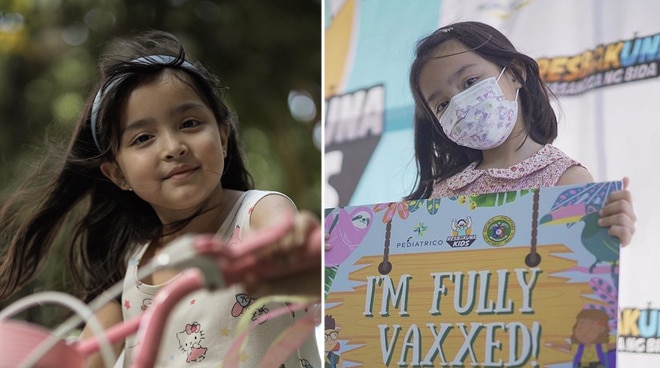 Zia Dantes, the daughter of celebrity couple Marian Rivera and Dingdong Dantes, is now fully vaccinated against the novel coronavirus.

Dingdong shared the good news with his fans and followers on Instagram on Monday, February 28.

"It’s ate Z’s second shot today and we did it via drive through. We were with 5 other kids inside the van since we were encouraged to do carpooling to manage traffic and limit the number of cars at the vaccination site," he said.

"Everything went smoothly, may pa-pizza, balloons, at mascot pa! They really made sure that the whole process will be child-friendly and I think they did a good job!"

Dingdong then expressed his joy that children now also have access to vaccines against COVID-19.

"This might just be a regular fun playday for her but for me, I'm just glad that we're slowly getting back up as a nation so we can slowly expose our children to the world again. Siyempre bilang tatay at magulang, importante sa akin na magkaroon ng mas malalim na pag-unawa ang mga anak ko sa nangyayari sa paligid nila. Kahit 'yung simpleng paglalaro at pagiikot sa iba't ibang lugar ay napakahalaga. Magandang marami silang makita, matanong, makausap, at maramdaman," he said.

Zia, 6, received her first jab against COVID-19 in early February.

Aside from her, other celebrity children who also got their COVID-19 vaccines include Judy Ann Santos and Ryan Agoncillo's kids Lucho and Luna, Bianca Gonzalez's daughter Lucia, and Marjorie Barretto's youngest child Erich.

The country began the vaccination of children aged 5 to 11 against COVID-19 in Metro Manila in February, after a few days of delays due to logistical issues.

The vaccine rollout was later expanded throughout the country, as part of the government's plan to inoculate 15 million children in this age bracket, according to the Department of Health.