Expectant mother Dionne Monsanto continues to give her fans and followers an update about her pregnancy. 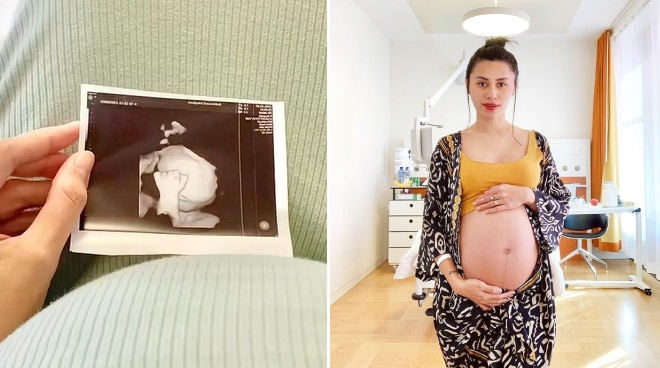 Expectant mother Dionne Monsanto continues to give her fans and followers an update about her pregnancy.

After showing off her baby bump, Dionne took to Instagram on Tuesday, February 8, to share an ultrasound image of her baby.

"I can’t stop staring at this partial face print during our ultrasound. Baby’s doing great inside my belly—looks like Papa and sleeps like Mama," she said.

The former actress also shared how she is preparing to give birth to her first child, as she posted photos and clips of herself at a hospital in Switzerland where she is now based.

"Day 8. I have lost count on how many needles have been pierced through my skin. So grateful to and for my husband @nayr_redlats for making sure I get the best medical care and accommodations and that I am as comfortable as can be all throughout. Thankful for all the messages of love & support from family & friends," she said.

It was on her 36th birthday last December when Dionne first shared the news that she is pregnant with her first child with her husband Ryan Stalder.

"Best birthday & birthday gift so far. This year has given me sooo much! I moved to a new country, learned a new language, discovered new interests, got engaged, married my best friend & love of my life, and together, we traveled & discovered different countries & cultures. BUT this may be our most exciting adventure yet!" she said at the time.

"I have never been this in love with life, and with love itself. I am so wildly grateful to the universe for conspiring in my favor," she added.

Dionne tied the knot with her husband in Switzerland in March 2021, just a month after they announced that they were engaged. Though they have known each other since 2007, it was only in 2018 that the pair started dating.

Dionne rose to fame after joining the second season of the reality show Pinoy Big Brother in 2007. As an actress, she is best known for her role as Lucy in the ABS-CBN romance drama Tubig at Langis. She also appeared in the hit Kapamilya series Lobo, The Legal Wife, Pasion De Amor, The General's Daughter and A Soldier's Heart.