LOOK: Netflix puts up ‘All Of Us Are Dead’ billboards with Pinoy high school memes

‘All Of Us Are Dead’ but make it Pinoy? Yes, please! 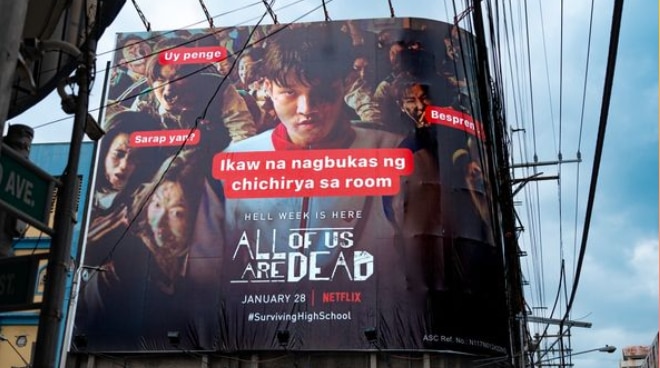 Streaming giant Netflix turned classic high school moments into relatable memes through the promotional billboards for the hit Netflix series All Of Us Are Dead.

Several netizens shared photos of these billboards that can be found on major roads across the country including Metro Manila, Cebu, and Davao.

Scenes include escaping cleaning duties at the classroom, being the only one inside the classroom with a paper pad, and bracing through the week ahead without any preparations.

Meanwhile, those who studied in Catholic schools would definitely be able to relate with one of the memes where students at a canteen suddenly hear the Angelus playing through the school’s public address system.

All Of Us Are Dead follows the story of students who get trapped in a school amid a zombie virus outbreak and later join hands to fight for survival.

Netflix All Of Us Are Dead