Jairus Aquino asked Iyya Angeles to be his girlfriend through his vlog. 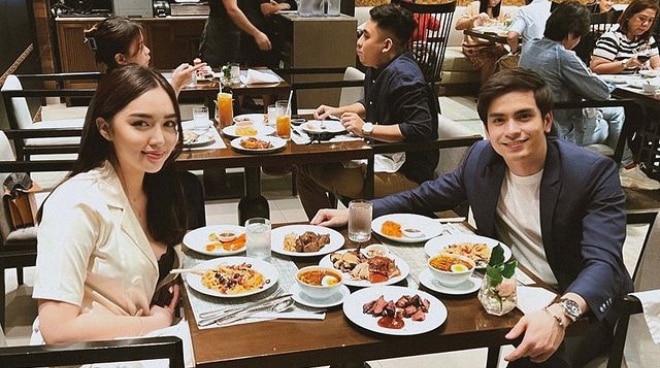 His girlfriend is Andrea “Iyya” Angeles, an influencer and video creator who has more than 830,000 followers on Instagram.

Jairus called February 12 the best day of his life after Iyya agreed to be his girlfriend that day.

The 22-year-old actor, along with some friends and Iyya, went to a mall in Quezon City to watch a film.

While inside the cinema, Jairus asked Andrea to be his girlfriend through a message on the big screen that says “Iyya, will you be my lifetime?” He also gave her a necklace.

“Sabi nga sa kanta you were just a dream that I once knew. Pero ngayon andito ka sa tabi ko at akin ka na! You deserve all the best in life baby! Mahal na mahal kita!” Jairus wrote in the caption of his post.

In another Instagram post last February 14, Jairus gave a peek at how he and his girlfriend celebrated Valentine’s Day.

Jairus Aquino rose to fame after he took on his first TV role as Pareng Jomar on the series called Super Inggo.

For a time, he was paired with Sharlene San Pedro in a love team called JaiLene.

He went on to pursue a career in hosting through the ABS-CBN music channel MYX.

His last known project was the film Boyette: Not A Girl Yet which premiered in 2020.

That same year, he and his ex-girlfriend broke up.