Actor Jake Ejercito tries out a new sport for the very first time with his daughter Elie on Siargao island. 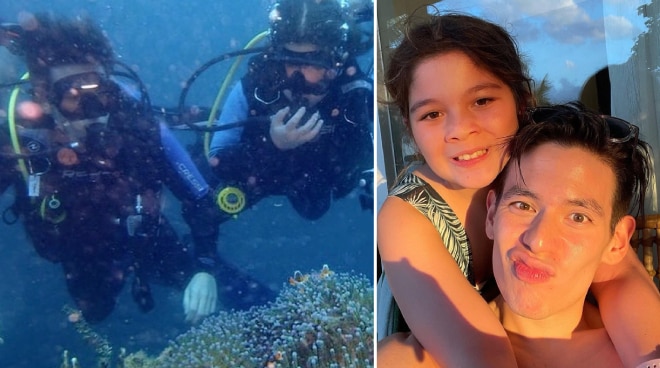 After working on his first teleserye Marry You, Marry Me which ended its run last January, Jake Ejercito has been taking advantage of his downtime to spend quality time with Ellie, his daughter with ex-girlfriend Andi Eigenmann. Last February 18, the Star Magic talent shared their recent bonding activity where he tried scuba diving for the first time. Unlike her dad, Ellie is not new to underwater activities, having been based in Siargao with her mom and siblings before typhoon Odette hit the island last year.

On his Instagram account, Jake wrote, “Wish we had a better underwater cam, but it was awesome to be with Ellie on my first ever dive. Looking forward to the next one already.”

Vocal about sharing a co-parenting setup with Andi, Jake revealed in a previous interview how becoming a parent did not come easy for him during the start.

Jake is also thankful for all the supportive comments he has been receiving online, noting how he is a being a good father. "Been receiving lots of positive comments about me being a 'good' dad to Ellie. Though I am truly humbled by and appreciate all the kind words, I honestly don’t think I’m doing anything special. I’m just trying to be the best dad for my daughter," he added.