Actress-host Pauleen Luna conquered one of her greatest fears when she agreed to try ziplining with her daughter, Tali Sotto. 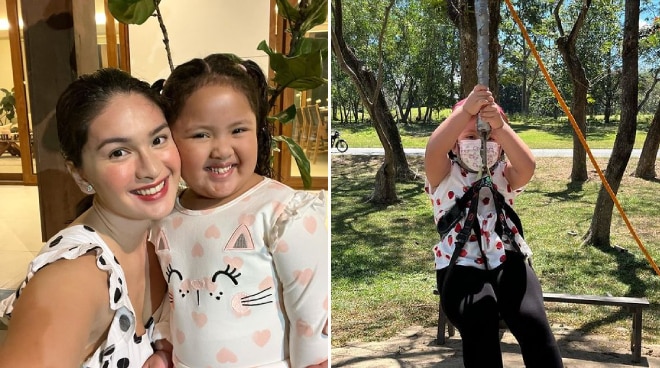 Actress-host Pauleen Luna conquered one of her greatest fears when she agreed to try ziplining with her daughter, Tali Sotto.

On Tuesday, February 16, Pauleen took to Instagram to share a video clip of herself riding a zipline with her daughter at The Fun Farm at Sta. Elena Golf Club in Laguna.

In the caption, she wrote: "There's a saying that a parent would do anything for their child... Today I proved that to be true."

"I am a brave person in general but if there's one big fear (pantay sila ng fear of frogs) that is the fear of heights!" Pauleen said. "This little girl asked me to ride the zipline with her. I had jello knees sa stairs pa lang. But I wanted to be brave for her! Thank God I did not faint! Hahaha!"

The actress went on to praise her daughter for being a "brave little girl" as she revealed in her post that Tali asked to ride the zipline not once, but twice.

"Proud of you Tali! What a brave little girl!" she said.

Pauleen Luna ‘praying’ for daughter Tali to have sibling

Meanwhile, Pauleen also shared pictures of herself and Tali spending quality time with her husband, veteran comedian Vic Sotto, in Laguna where they used to live.

"Felt so nostalgic seeing our old village again!" she captioned the photos.

Pauleen and Vic have been married for more than six years. They tied the knot at St. James The Great Parish Church in Alabang on January 30, 2016.

The couple welcomed Tali, their first child together, in November 2017. Aside from Tali, Vic has four other kids: Pasig Mayor Vico Sotto (with Coney Reyes), actors Oyo and Danica Sotto (with Dina Bonnevie), and visual artist Paulina Sotto (with Angela Luz).