In a vlog, celebrity couple Edu Manzano and Cherry Pie Picache get candid about starting their own family. 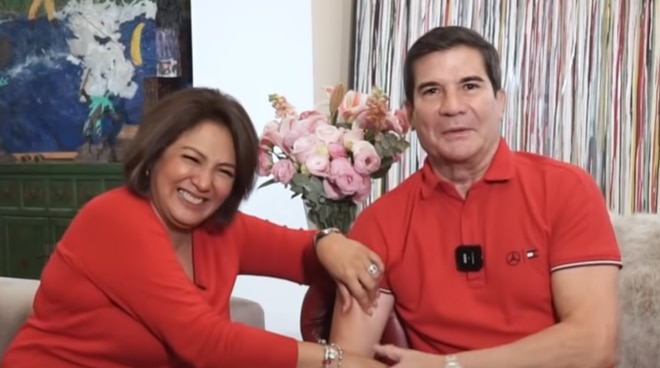 After confirming that they had rekindled their relationship after they first started dating two decades ago, Edu Manzano and Cherry Pie Picache have been a portrait of a couple that looks more in love the second time around, as seen from their travel photos here and abroad. Just in time for Valentine’s day this year, Cherry Pie launched her YouTube channel A Slice of Pie with the vlog titled “UNLI KILIG WITH PIEDU! #AskPieDu Part 2!” where she and Edu answered questions from fans about their relationship.

Starting off the vlog, Edu admitted he is is not the typical hopeless romantic, but he is inspired by his love for Pie, who is also 15 years his junior. “Hindi ako yung typical romantic na sunsets, hindi. I find romance in everything. Definitely (inspired). Inspired to wake up every morning with a smile on your face and look forward to the day. Ayoko kasi yung nagsisimangot. Gusto ko lagi akong nakangiti. Kailangan laging positive,” he shared.

Answering a question of whether they have plans of starting their own family together, the couple admitted they would love to have children. “Who wouldn’t want babies? Hindi ba? I’d love to have babies,” said Edu. Pie said she would love to give her son Nio a sibling. “Lalo na ako! I only have one [child]. I mean ‘di ba, it would be nice? Siguro ang ganda ng anak natin nun!” she added.

Edu revealed that one of the reasons he would love to have another child is so he can get the opportunity to dance with his daughter during her debut. Edu’s only daughter Addie Manzano with former partner Rina Samson had opted not to have a debut.

When asked how far they are willing to go for each other, both celebrities said the sky is the limit at this point in their relationship.

“Of course I’ll do everything for you. Hindi ako nandito para kumpletuhin yung buhay mo. As much as medyo kumpleto na, pero andito ako para dagdagan, to add more love, to make you more productive, to make you a better person, and you know that I’ll always be behind you in everything. So I hope I am able to do that in whatever you do,” Pie admitted.

Edu agreed. “It’s got to be all the way or no way. You know you really have to give your best. Otherwise, what’s the point kung nag-e-edit ka ng sarili mo?  Go all the way.”

In one part of the vlog, Pie asked Edu to tell her what makes their relationship different from his previous relationships which the veteran actor gamely answered, “Hindi kasi kami naghahanap ng atensyon or publicity. Nag-de-date na nga kami nun eh for almost a year and walang nakaalam. We were not seeking anyone’s approval. Here, nothing to hide first of all. We’re just being ourselves.”

Before ending their Q&A, Pie thanked #PieDu fans and followers for accepting their relationship. “We’d really, really like to thank everybody for encouraging us, for supporting us, for wishing us well, for praying for us. Thank you talaga. We are really inspired by your encouragement and all the positivity that you bring to both of us. So thank you so much sa inyong lahat,” she said.

Edu and Pie first revealed their relationship last November 2021. They rekindled their romance while working on the set of the teleserye Marry Me, Marry You where they played a married couple who are the parents of Paulo Avelino.