Vice Ganda feels overwhelmed by the love and support they have been receiving since they revealed a huge milestone in their relationship. 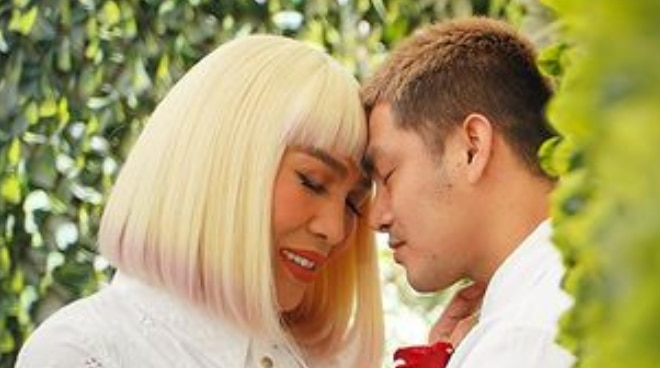 Comedian-host Vice Ganda feels overwhelmed by the love and support he and his partner Ion Perez have been receiving since they revealed over the weekend a huge milestone in their relationship.

On Sunday, February 13, the couple made a surprising revelation that they exchanged vows in a wedding commitment ceremony during their trip to Las Vegas, United States in October last year.

They made the announcement in a vlog released on Vice's YouTube channel, showing their preparations for the "wedding", as well as the actual ceremony, which was held at The Little Vegas Chapel.

In his most recent Instagram update, Vice expressed his sincerest gratitude to everyone who congratulated him and Ion on the milestone.
"Thank you very much for the overwhelming love that you have been sending us. Our hearts are full. Happy Valentine’s Day!!!" he said.

Angel Locsin, Marian Rivera, Bea Alonzo, Catriona Gray, Sarah Lahbati, Jolina Magdangal and Darren Espanto were among those who sent their best wishes to the couple in the comments section.

It was in October 2019 when Vice first confirmed his relationship with Ion, after a "Magpasikat" performance on It's Showtime.

Previously, Vice admitted that he was already considering getting married and having his own family, as he talked about how his relationship with Ion changed his perspective on love and marriage in the Spotify podcast Soundtrip with Jugs & Teddy.

"Nagbabago rin pala talaga 'yung tao ano? 'Di ba sabi ko, ['yung kasal], 'No, not for me.' If my friends, if some people in my community want to do it, I support them. Pero ako, not my thing. Hindi ko nakikita 'yung sarili ko," he admitted.

At the time, the comedian also expressed his excitement at the thought of marrying Ion.