Diego Loyzaga on working with Louise Delos Reyes on the movie ‘The Wife’: ‘Ang galing niya!’

‘The Wife’ star Diego Loyzaga talks about working with an almost all-female cast and crew in his latest digital film. 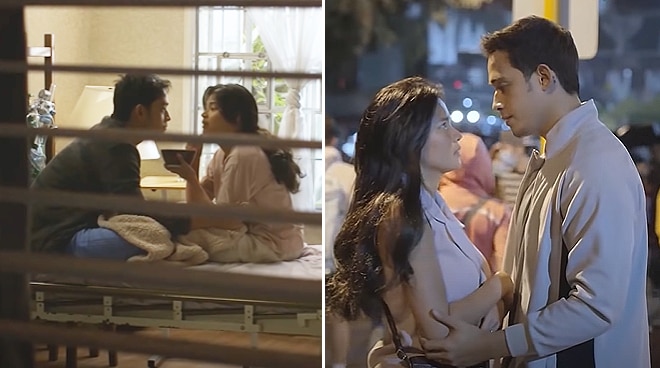 Screenshot from The Wife Official Trailer

In his latest film project, Diego Loyzaga plays the role of a two-timing husband named Cris who cheats on his wife (played by Louise Delos Reyes) with his ex-girlfriend (Cara Gonzales).  When his character decides to mend his marriage, he is diagnosed with cancer. Diego said his role in The Wife was a different kind of acting challenge for him.

“It was definitely different preparing for this because I get sick in the movie and there’s cheating involved and a third party and all that stuff. It’s different because you have to make pagpag after the scenes because you can’t take that home with you. It’s difficult. That’s that,” he admitted during the Vivamax mediacon last February 7.

READ: Diego Loyzaga on going to the US for the first time: ‘I think I’ve found a home in this place!’

The 26-year-old actor talked about his two leading ladies who play his wife and mistress in the film. Diego said he was happy to work with Louise again after working together on the Philippine adaptation of the 2018 South Korean drama Encounter.

“I was happy to finally have a scene with her because sa Encounter hindi nga kami nagka-eksena masyado. If ever, very minimal lang. And she’s a great actress. She’s been in the industry for a long time so I got to see how someone of her level works. And ang galing niya. She really is good. She really is a great actress. With Cara naman, I saw myself in Cara a lot in our scenes. There are a few scenes where Cara and I talk to each other before doing a scene and we talk about how we can do it better. There were a few scenes that we had to do over and over again until we got the right emotion,” he shared.

In the Vivamax Original film written and directed by Denise O’Hara, Diego said working with a more veteran co-star was a challenge but there was a lot of challenging moments for him while working on the film.

“The entire movie was challenging. Louise is very good and every scene I had with her was very challenging and I was motivated and at the same time intimidated also by her just a little bit (laughs). But she took care of us. We would discuss the scenes beforehand and I would see that she knew her character very well. She was very in the zone. We had one confrontation scene where one take pa lang Louise gave it her all and I have to admit, I wasn’t there and direk Denise told me we’d do one more. And when we did the second scene I felt bad because I felt Louise more in the first scene and I felt like it was my fault. So we kept on doing it until we were both there. So Louise was great 100% of the time.

“With Cara also we had a confrontation scene and it was our first scene together and it was like the heaviest scene we had together. It took a while for us to get it also. It was difficult because it was the first time working with her and we hadn’t even had a conversation before that scene and it was quite an intense scene. Because we’re best friends in the story, kababata ko siya and she’s the one I had an affair with. So dapat nandun na yung lalim eh. So we had to repeat and repeat until we got it right. Not every scene was easy. it was definitely challenging. They all kind of were in a way,” he admitted.