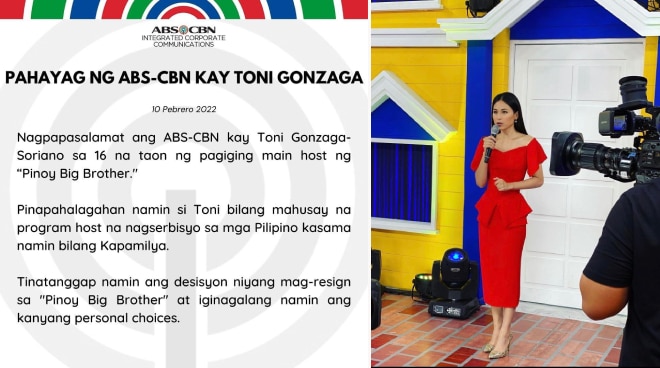 ABS-CBN, Toni Gonzaga’s home network for the past sixteen years, has issued a statement regarding her decision to leave Pinoy Big Brother, the show which skyrocketed her to prominence.

The media giant said it has nothing but gratitude to Toni for serving as the main host of the hit reality series for almost two decades.

“ABS-CBN remains grateful to Toni Gonzaga-Soriano for the 16 years of being the main host of Pinoy Big Brother,” ABS-CBN wrote in its statement.

It also said it values the talent Toni has shown throughout the many years she joined ABS-CBN in serving the Filipinos.

“We value Toni’s hosting prowess and her many years of serving the Filipino with us as our Kapamilya,” ABS-CBN stated.

ABS-CBN further stated that it accepts Toni’s decision to leave the show and that it “respects” her personal choices.

“We accept her resignation from Pinoy Big Brother and respect her personal choices,” ABS-CBN said.

The 38-year-old celebrity has drawn flak from netizens during the proclamation rally of the Marcos-Duterte tandem, particularly after her warm welcome for Rodante Marcoleta — the lawmaker who pushed for the shutdown of ABS-CBN.

Toni has appeared on numerous TV shows and starred in several films under ABS-CBN. She has released albums under the network’s record label, Star Music.