Hilary Duff pens tribute for Aaron Carter: ‘I’m deeply sorry that life was so hard for you’ 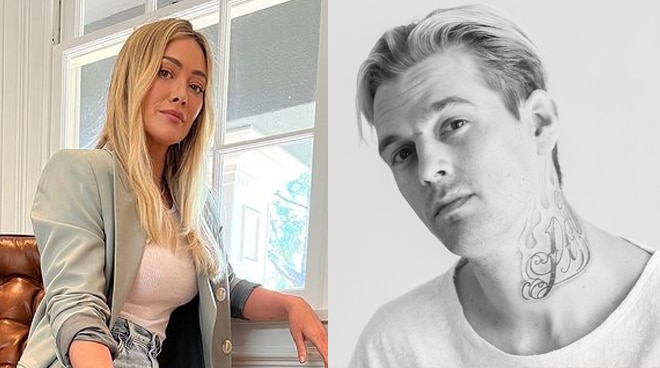 Hilary Duff took to social media to pen a message for her former boyfriend Aaron Carter who passed away recently at 34.

"For Aaron - I'm deeply sorry that life was so hard for you and that you had to struggle in front of the whole world," she posted.

The actress added, "You had a charm that was absolutely effervescent."

"Boy did my teenage self love you deeply. Sending love to your family at this time. Rest easy," Hilary wrote.

Hilary and Aaron dated on and off for around three years which began in 2001. Aaron also made a guest appearance in Hilary's Disney Channel series Lizzie McGuire.

Aaron passed away on Saturday, November 5 (US time). According to CBS News, the singer was found dead in his home in Los Angeles, California.

"We are extremely saddened and shocked to confirm the passing of Aaron Carter today," Aaron's manager Roger Paul said in a statement as reported by CBS News.

He added, "At the moment his cause of death is being investigated. We ask that you give the family time and they will have more information when available. We cannot express the outpouring of love coming in."

Following his passing, Aaron's brother, Nick Carter of Backstreet Boys also took to social media to pen a message for his late brother.

"My heart is broken. Even though my brother and I have had a complicated relationship, my love for him has never ever faded. I have always held on to the hope that he would somehow, someday want to walk a healthy path and eventually find the help that he so desperately needed," he posted on social media.

He added, "Sometimes we want to blame someone or something for a loss, but the truth is that addiction and mental illness is the real villain here. I will miss my brother more than anyone will ever know. I love you Chizz. Now you can finally have the peace you could never find here on earth….I love you baby brother."

He appeared in several television shows including Figure It Out, Zoom, Rocket Power, and Dancing with the Stars, among others.