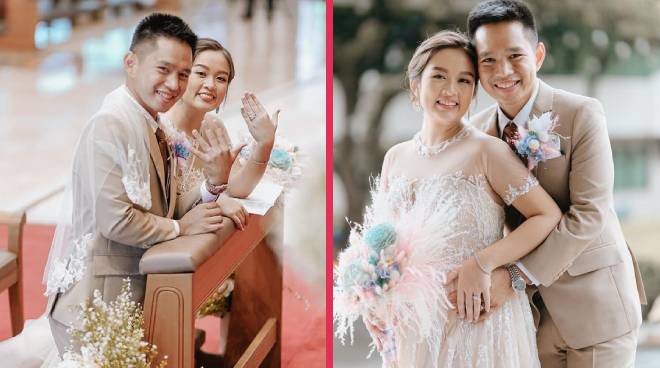 Trina “Hopia” Legaspi and her husband Ryan Jarina have tied the knot in another church wedding ceremony, almost a year after getting married and announcing Trina’s pregnancy last October.

The couple, who held their first wedding in November 2021, exchanged vows at Christ the King Parish Green Meadows in Quezon City on Saturday, November 5, in front of their family and close friends.

“As we head into a year since we got married, I feel so blessed that we were able to celebrate our love a second time around. Before Ryan's grandparents passed away, they made a request: that we marry in a Catholic church in Christ the King. We were so happy to fulfill their wishes and honor their memory. They may not be here physically, but their presence are deeply felt and missed,” wrote Trina.

After the wedding, the couple held a gender reveal reception to celebrate Trina’s pregnancy.

It was in October when the former child star announced that she and her husband are expecting their first child together.

Trina and her husband have been together since 2014. They announced their engagement in November 2020, after dating for almost seven years.

Trina, 28, first shot to fame as part of the original Goin Bulilit cast, with "Hopia" as her screen name.

She most recently appeared in ABS-CBN's romance-comedy series Love In 40 Days which starred Ronnie Alonte and Loisa Andalio.