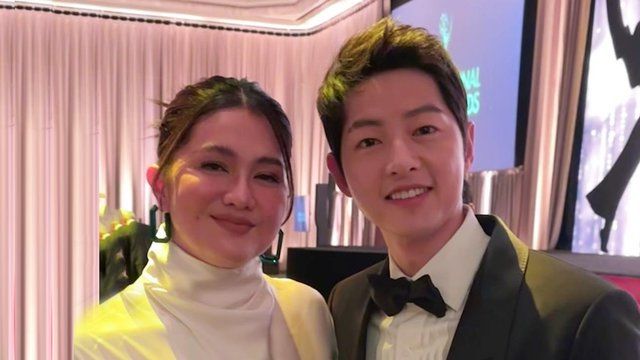 Actress Dimples Romana went into fan girl mode when she met and posed for a photo with Korean superstar Song Joongki.

Sharing their photo together on Instagram, Dimples wrote, "Many of my dreams came true with that NYC trip for the #iEmmys and I can’t wait to share them all with you, but for now, let me share this.

"Hi Mr @hi_songjoongki. It was such a pleasure and huge honor to meet a fellow actor like you. I am a huge fan. We Filipinos LOVE youuuu."

Dimples said she had a hard time keeping calm after meeting Joongki, one of her idols, who is known to Filipino fans as star of the popular K-dramas Descendants of the Sun and Vincenzo.

"P.S. He was super warm, grabe so handsome in person lalo and super humble," wrote the actress.

“Okay ‘yun na muna guys. Just sharing my kilig as a fan. Halos 'di ako makahingaaaa nyaaan,” she added. "Manifesting that in this lifetime I get to work and act alongside him. LORD PLEASE.”

In the comments section, fans and fellow celebrities, including known K-pop fans Anne Curtis and Sharon Cuneta, expressed their excitement.

Dimples, 38, attended the 50th International Emmy Awards as a juror and now an official member of the Television Academy.

READ: Dimples Romana is a juror for the International Emmys

She first served as a juror for the prestigious awards ceremony back in 2020. In a social media post, Dimples described the feat as a dream come true.

"In my 25 years as an actor, I have to say this day may just be one of my most favorite just yet," she said. "And I have a funny feeling, there’ll be more to come."