Kaye Abad was in tears as she had to leave her son in the Philippines. 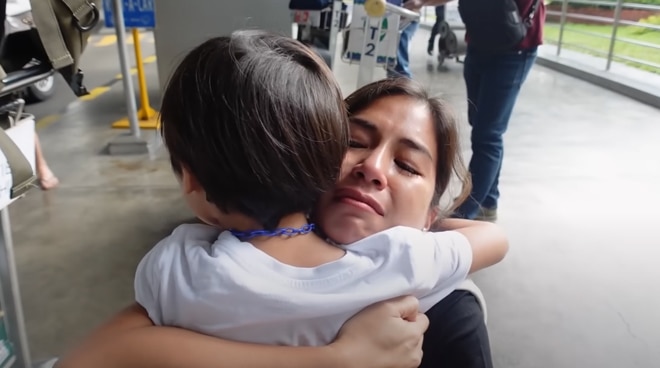 Kaye Abad couldn't help but turn emotional as she bid goodbye to her son prior to her departure for the US.

In a vlog uploaded on YouTube, Kaye shared her frustration after she was forced to leave her son in the Philippines when she and her husband Paul Jake Castillo flew to the US for a vacation.

Kaye can be seen crying while hugging her son Joaquin prior to their departure at the Mactan-Cebu International Airport.

The Cebu-based actress revealed that her son's application visa to the US was denied, making the latter unable to join their trip.

Kaye explained that they were having second thoughts whether or not to push through with their trip considering Joaquin could no longer go with them, but said they already bought tickets.

Meanwhile, netizens couldn't help but feel for Kaye, with many of them sharing how much they can relate with her.

"Only us mothers can relate how painful it is to leave our child behind," one netizen wrote.

"Naiyak ako kay Kaye. This is how it feels like being a mom," another netizen wrote.

"Kaye's emotions got me teary eyed," a netizen shared.

In the same vlog, Kaye shared her experience during her first few days in the US.