The sculptures that Bright Vachirawit and Win Metawin received were created by Filipino artist Jef Albea. 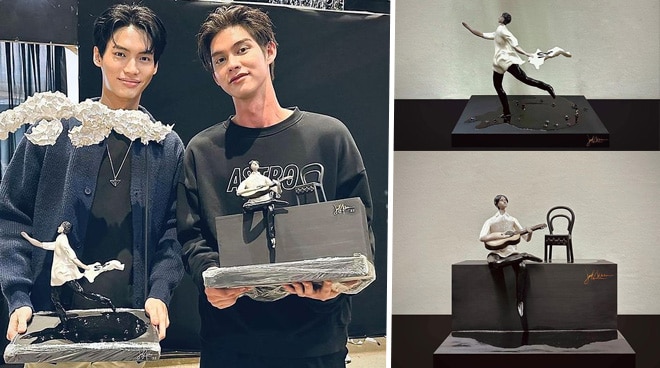 Thai actors Bright Vachirawit and Win Metawin received Filipino-made sculptures while they were in Manila for their Shooting Star fan meeting.

Filipino artist Jef Albea was commissioned to create the sculptures for the Thai stars.

Snapshots of Bright and Win holding the sculptures were posted by MJ Felipe of ABS-CBN News on Twitter.

Inspired by Bright and Win's characters in their hit Boy Love series 2gether, the sculptures were named "Sarawat" (the one playing the guitar) and "Tine" (the one running with the jersey number 12).

Fans were quick to express their amazement after seeing the sculptures of Bright and Win.

"That’s probably one of the best gifts from the Philippines wow," one fan said.

"I'M CRYING 😭 its so beautiful. You guys are loved more than you know," another fan commented.

Jef had also previously made sculptures for celebrities like Kathryn Bernardo and Regine Velasquez.

Bright and Win's international hit series 2gether aired from February to May 2020.

Following the success of the series,  a five-episode special titled Still 2gether was aired soon after. Later on, a film called 2gether: The Movie was released.

The two Thai stars then became part of the series F4 Thailand: Boys Over Flowers which aired from December 2021 to April 2022.

Bright and Win arrived here in the Philippines alongside their fellow F4 Thailand co-stars Dew Jirawit, and Nani Hirunkit on Thursday night, November 17 ahead of their Shooting Star fan meeting which happened at the World Trade Center on November 19.

Prior to their fan meet here in the Philippines, Bright and Win had wished to visit the country to meet their Filipino supporters.

"Thank you for your support. We hope you enjoy our show. We hope you watch until the end,” Bright said during a digital press conference back in March this year.

We want you to know that we really appreciate the support that you give us. We hope to see you guys in the Philippines. If we have a chance, we will be there for sure. Love you," he added.