Nadine Lustre turned 29 over the weekend. 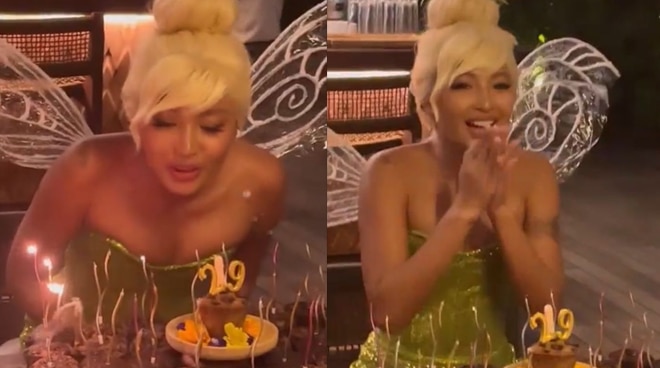 Nadine Lustre welcomed her 29th birthday daintily dressed up as Tinkerbell, the sweet and sassy fairy from the well-loved story Peter Pan.

It was just last week that Nadine reacted to bashers who kept posting negative comments about her body and her age. Some said she looked like she gained weight, while some even commented on her skin. She also received comments about looking much older than expected.

Nadine refused to let these slide, and clapped back at those insistent on body shaming her.

“I find it so weird when people say I’ve changed and I look older,” Nadine said. “What? Were you expecting me to be the same person when I was 21? I’m turning 29 next week.”

READ: Nadine Lustre lambasts bashers telling her she looks older than her age

Nadine is quite confident with her body and her age.

Earlier this year, she showed just how comfortable she was in her own skin when she went almost bare for a photo shoot with Siargao-based photographer Wang Borja.

Snapshots of Nadine’s special day by photographer Andrei Suleik show her blowing out her birthday candles in what seems to be an intimate gathering at an island resort.

A photo shared on Instagram by @txcjosh also revealed that Nadine received a new surfboard from her boyfriend, Christophe Bariou, for her birthday.

Nadine also spent her birthday last year in Siargao, the island that she calls her second home. It was also a small celebration then, where she was joined by her immediate family not just for her birthday but for the groundbreaking of her property there. It was also then that her family got to meet Christophe, who has a business there.