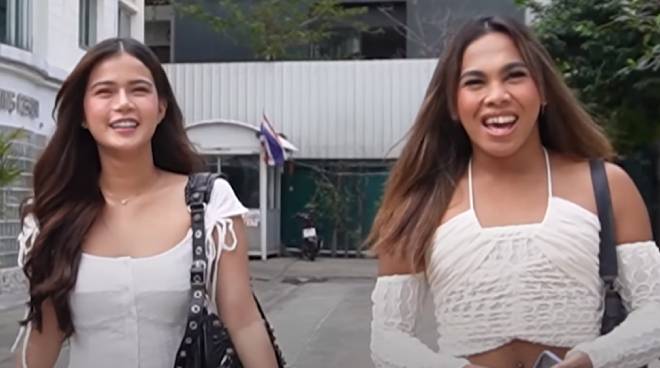 Earlier this month, actress Maris Racal flew to Bangkok, Thailand along with fellow artist Awra Briguela and some good friends. Their group rented accommodations at an Airbnb and had their first mini adventure the day they arrived by experiencing how to commute by taking a public bus to go to an area called Jeh O Chula for food. Aside from that, they also experienced riding an automatic rickshaw called the tuktuk on their way to Bangkok’s famous Chinatown area.

Maris chronicled their trip in a recent vlog on her YouTube channel which also showed their visit to the Museum of Contemporary Art where international anonymous street artist Banksy had an exhibit. During their third day in the city, Maris’s group took an out-of-the-city trip to a historic city outside Bangkok called Ayutthaya to visit the temples. The drive took a little over an hour.

The singer-actress also made sure to appreciate all the historic sites and temples they visited. “Ang galing, prineserve talaga nila. Tingnan niyo 500 years ago tapos nag-build sila ng bagong church around it. Ang galing talaga sobra,” she added.

Maris started in showbiz as a housemate on Pinoy Big Brother: All In in 2014. Her most recent acting roles in ABS-CBN include How to Move On in 30 Days, The Goodbye Girl, and The Kangks Show. She made her singing career debut in 2015 with “Tanong Mo Sa Bituin” as part of Star Records’ OPM Fresh album. In 2020, she signed with local music label Balcony Entertainment and released her single, "Not For Me.”