Tim Yap wins a trip to Australia with his Thanos costume

It took Tim Yap some time to remove all the makeup. 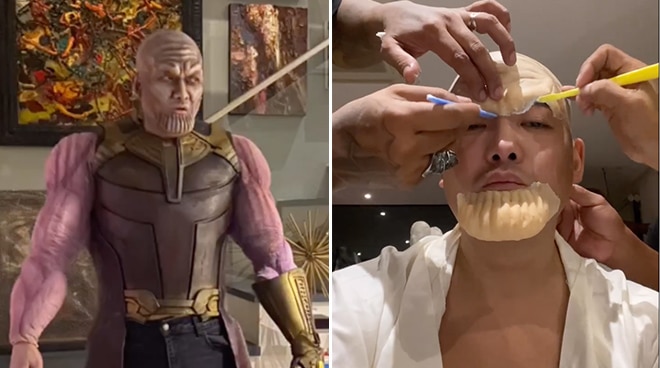 Events host Tim Yap happily shared with his followers on Instagram his transformation into Thanos which won him a trip to Australia. The social media influencer attended his friend’s birthday party and wanted to impress everyone who came.

This wasn’t the first time Tim wore the Thanos costume.

“The Return of Thanos. Reprised this costume for a friend's birthday and won a trip to Australia for doing so,” he wrote.

The 45-year-old events host showed on his Instagram reel the tedious process he had to go through in order to replicate the Thanos look. He shared that it was difficult to put on the outfit and it took a long time to remove it as well.

Tim was happy with his costume despite the hassle as he won best in costume and a five days-and-four nights stay in Sydney, Australia with all expenses paid. The influencer showed glimpses of his competitors as well on his Instagram stories.

Friends and followers of the events host were amazed by the costume and the effort he took just to win the award. Veteran actor John Arcilla jokingly asked Tim if he could borrow the costume next time.

Last Halloween, Tim surprised everyone with his impressive costume as Prince Philip. He has been known to be extravagant when it comes to wearing different costumes. While he enjoys dressing up for certain occasions, Tim shared that he is not a cosplayer.