Jo Koy expresses his appreciation for his sister who has been with him throughout his journey as a stand-up comedian. 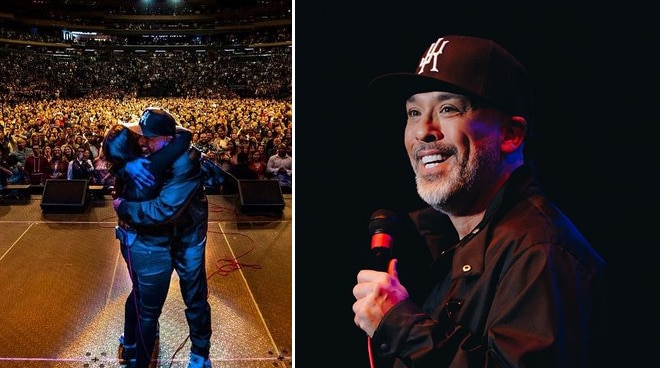 Filipino-American stand-up comedian Jo Koy took to social media to pen a message for his sister Gemma as he marked a new milestone in his career after his sold-out show at the Madison Square Garden.

On his social media page, Jo Koy shared a photo of himself and his sister hugging each other on stage after his sold-out show.

Jo Koy shared that his sister has been with him every step of the way from the very moment when he was still starting out in the business.

"This picture is everything! My sister has been there for me through thick and thin. When she was a flight attendant, she would hook me up with stand by tickets so I could fly to crappy college gigs for free and she would meet me there and she would be so excited to watch me perform inside the student union cafeteria in front of 6 people. Clapping and cheering as if her brother was playing Madison Square Garden," he wrote.

The comedian relayed that his sister even decided to work for him when his career started getting bigger.

"When my business started taking off and I needed help, she quit her job to work for me. God blessed me with the greatest sister anyone could ask for. Ride or die!" he wrote.

Jo Koy fulfilled his dream of playing at the Madison Square Garden last November 10 which his sister witnessed.

"Thursday was the night Gemma got to see her brother actually play Madison Square Garden. This picture right here is us crying and hugging and her yelling in my ear, 'BROTHER!! You Sold Out Madison Square Garden and YOU CRUSHED IT!!!' Mahal kita Gemma! We did it!!!" he posted.

In his previous Instagram post, Jo Koy described playing at the Madison Square Garden as the "biggest night of my career."

He also said that he waited more than three decades to play at the world's most famous arena.

"I waited 33 years for this moment! I’m playing Madison Square Garden Tonight!!! NEW YORK CITY!" he posted on his social media page back on November 10 before his show.