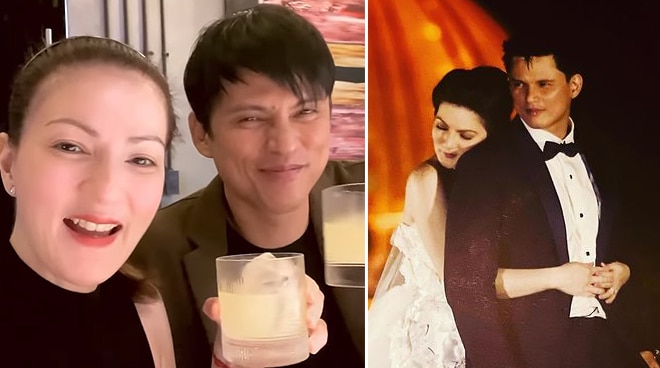 To mark the milestone, the two shared photos from their 2012 wedding along with their sweet messages for each another.

“To my Honey, Dinosaur and our Tatay, Happy Anniversary! We’ve been through a lot and I wouldn’t have survived those trials without you. Thank you for always being there for me and for my family. You are my rock and pillar of strength. I will marry you all over again,” wrote Carmina.

“Happy 10th Year Anniversary to us today my Muffin @mina_villaroel. it doesn’t matter how many rough waves we will encounter.. just hang on tight… YOU ARE FOREVER SAFE IN MY ARMS…with God’s Mercy of course,” said Zoren.

Carmina and Zoren wed in a surprise ceremony in November 2012 after being a couple for more than a decade. They have two kids, twins Mavy and Cassy Legaspi, who followed in their footsteps and also joined showbiz.

Previously, the actress-host shared the secret to her happy marriage to Zoren in an interview with PUSH.

“Number one is constant communication. ‘Yun lang naman importante in any relationship, whether mag girlfriend-boyfriend, whether friendship or mag-sisters, it's important to have open communication,” she said.

READ: Carmina Villaroel shares the secret to her happy marriage