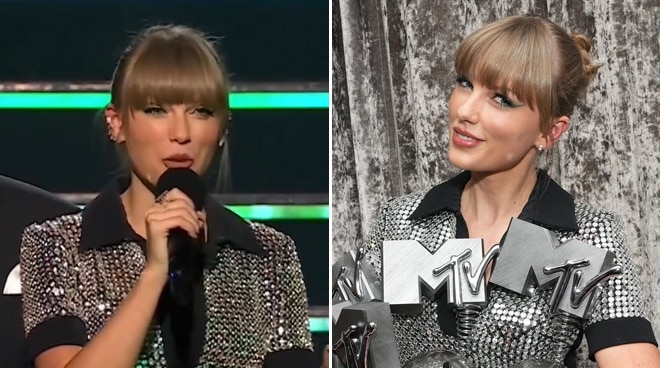 In her speech for the Best Video award, the top award for the night, Taylor remarked that it was the fans who made the short film for the song possible.

She continued, "It was never a single. It was never supposed to have a music video, nonetheless a short film. I can only explain this by saying that the fans willed this to happen. I will never stop thanking you for it."

Taylor also extended her gratitude to the stars and crew of the short film saying, "Also this would never have happened without Sadie Sink and Dylan O'Brien. I will say it forever. Thank you to the crew who helped work on it and anyone who thought that this song had a life past when it came out ten years ago. I love you all so much. I am so grateful for you. Thank you MTV. Thank you fans. I cannot wait to see you all on tour. I love you all so much," she added.

Meanwhile, in her speech for the Best Long Form Video award, Taylor remarked that creating the short film for the song made her realize that filmmaking could be an "extension" of her storytelling.

"I have been writing and directing my music videos for a long time but this was the first short film that I made and I felt like I learned so much about how making film could be a natural extension of my storytelling just like songwriting," she said.

"And so I have to thank the people who made this possible, Sadie Sink and Dylan O'Brien who believed in me and trusted me with their talent. They were incredible collaborators and now friends and I am so grateful to the fans for making this happen at all. You're the only reason anything has ever happened to me. And thank you MTV, I appreciate this so much," Taylor added.

READ: Taylor Swift wants to direct a feature film following ‘All Too Well: The Short Film’

It was in November 2021 when Taylor released the short film for "All Too Well (10 Minute Version) (Taylor’s Version)" following the release of Red (Taylor's Version) album.

The short film is written and directed by Taylor herself.

"I wanted to make a film about an effervescent, curious young woman who ends up completely out of her depth. You know when you’re walking into the ocean? It’s so fun, the idea of going out so far your feet don’t touch the ground. But you can get swept away," she said during an interview at the Tribeca Festival back in June about the concept of the short film.