Kim Seon-ho will hold a fan meeting in January in Manila. 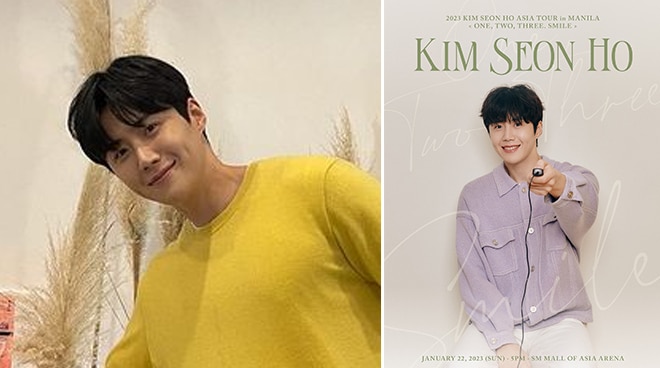 Korean actor Kim Seon-ho is heading to the Philippines next year for his very first fan meeting in the country.

Concert organizer PULP Live World announced on Monday, November 14, that Seon-ho will be holding his "One, Two, Three. Smile" fan meet at the Mall of Asia Arena in January.

"On the count of three, flash your heart eyes and blushing smiles because South Korea's ultimate charmer, KIM SEON HO is coming to Manila! The beginning of our 2023 is set to be filled with love as we welcome KIM SEON HO and his fan meeting tour - 2023 KIM SEON HO ASIA TOUR in MANILA <ONE, TWO, THREE. SMILE> happening on January 22, 2023, 5PM at the SM Mall of Asia Arena," PULP posted on their social media pages.

Tickets for the event will be available starting December 4 via SM Ticket outlets nationwide and online.

Filipino fans were quick to express their excitement following the announcement.

"Just passed my board exam and I think this is the perfect gift for me!" one fan said.

"Thank you, Pulp! Just booked my ticket to Manila.. Automatic!!!" another fan posted.

Kim Seon-ho made his television debut in Korea in 2017 with the series Good Manager. He rose to global popularity with his role in the 2020 series Start-Up. Seon-ho played the role of Han Ji-pyeong, a team leader at SH Venture Capital that invests in start-ups in the show.

In 2021, he starred in another hit series as the lead actor in tvN's Hometown Cha-Cha-Cha. He played the role of Hong Du-sik, Gongjin's handyman who is popularly called as Chief Hong around the village. Chief Hong does not have a full-time job and is always busy giving a helping hand to everyone.

In the same year, Seon-ho was named as the Gallup Korea's Television Actor of the Year.