Coleen Garcia on Billy Crawford’s win: ‘You deserve all of this and more’

Billy Crawford emerged as the champion of the latest season of “Danse Avec Les Star” Together with dance partner Fauve Hautot. 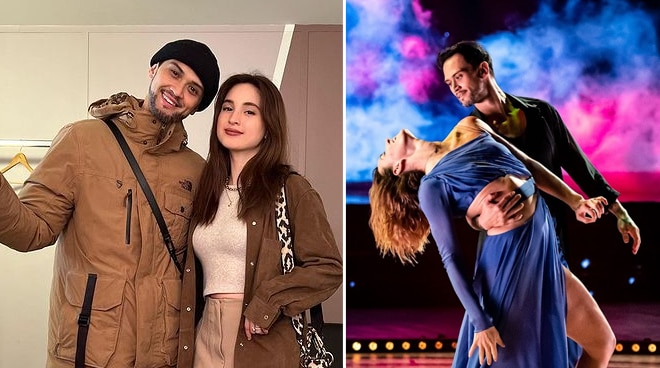 Billy Crawford and his dance partner emerged as champions in the French version of Dancing with the Stars.

"Words cannot express how PROUD I am of you, my love,” gushed Coleen Garcia of her husband Billy Crawford’s latest achievement.

But Coleen clarified that her pride wasn’t just about the trophy.

“Not just for WINNING this difficult competition, but for growing into the person you have become: a kind, humble man who works hard, dreams big for his family, shoots for the stars and makes sure to lift as many people up with him along the way," wrote Coleen in her post dedicated to Billy.

It was in late July 2022 when Billy confirmed his participation in the French version of the show Dancing with the Stars.

Billy was a crowd favorite from the get-go – so much so that he was even dubbed “Billy the Favorite.”

He had been impressing the judges with his pro moves, which were honed more as he owned the dance floor with partner Fauve Hautot. The pair even earned a standing ovation from the judges on the first episode due to their attunement to each other.

For the semi-finals, Billy and Fauve got almost perfect scores as they danced along to Maneskin’s “Let’s Get It Started” and Snow Patrol’s “Chasing Cars.” Despite Billy suffering from a back injury, they were able to make it to the grand finals.

Billy couldn’t help but be emotional several times throughout the entire experience. Appearing to be overwhelmed, he was mostly full of gratitude for being able to do what he loves to do.

“It has been an amazing experience and such a pleasure to dance on a daily basis,” said Billy. “To all the artists, judges, my dance partner who became my sister @fauvehautot , pro dancers, prod, TF1, thank you for this blessing and making my job worth loving!”

He also offered his performance to his wife Coleen and son Amari.

“To my wife and my son, this is for you!” he declared.

For the finale, Billy and Fauve danced a contemporary dance to “L’Enfer de Stromae.” He garnered 53.5% of the audience’s votes, while his tight competitor, 17-year-old The Voice Kids France 2018 fourth placer Carla Lazzari, got 46.5% of the votes.

“I don’t believe it, it’s a dream for me,” expressed an emotional Billy as he received his trophy.

Understandably, Billy is over the moon with excitement.

Supportive from the very beginning, Coleen happily shared this proud moment with Billy.

"You are an AMAZING person, and I am soooo so blessed that our son gets to look up to you and have you as his Dad,” she told Billy on Instagram. “You amaze me every time. I love you, and I’m SO HAPPY for you! You deserve all of this and more.”

“I LOVE YOU SO MUCH and thank you soooooooooooo much for just EVERYTHING,” Billy replied.