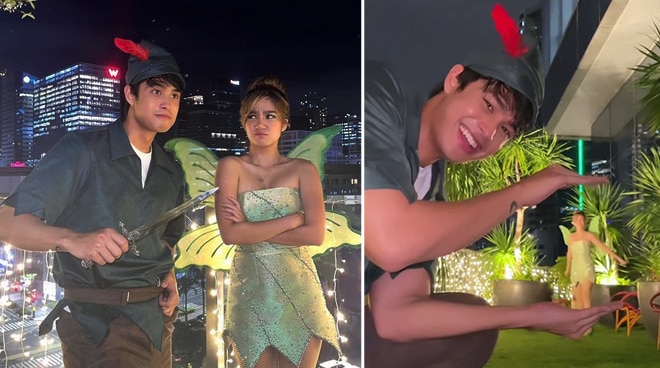 For Halloween this year, popular love team partners and rumored couple Donny Pangilinan and Belle Mariano shared their super cute costumes as Peter Pan and Tinkerbell from the Walt Disney animated film Peter Pan. The couple, who are more popularly known as “DonBelle” are also known for their playful and creative personalities on and offscreen.

On his Instagram account, Donny shared a fun video clip DonBelle made where Belle is seen dancing to the song “S.I.M.P (Squirrels In My Pants)” from the animated show Phineas and Ferb.

In her post, the An Inconvenient Love stars pose amidst the backdrop of illuminated buildings. Belle wrote, “All it takes is faith, trust, and a little bit of pixie dust”

After starring in the popular teen series He’s Into Her for two seasons, Donny and Belle star in the new film An Inconvenient Love. In the film, Belle plays the role of an ambitious girl named Ayef who one day dreams of becoming an animator. She ends up meeting Manny (played by Donny) and the two agree to having a convenient relationship with a deadline until Ayef has to leave for Singapore. The film is set to be released in local cinemas on November 23.